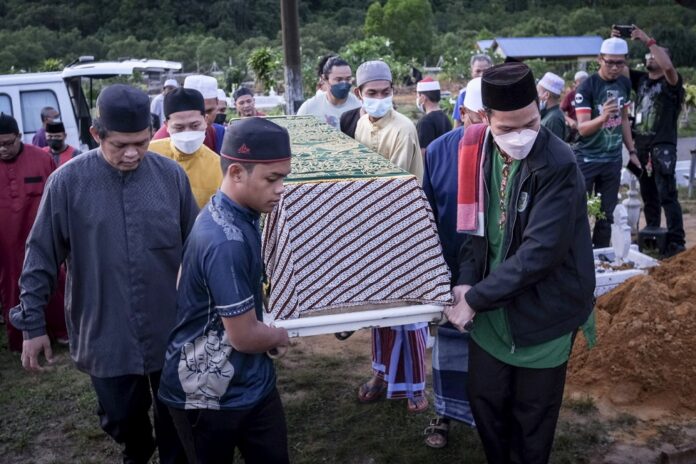 KUALA KANGSAR, May 13 — Prime Minister Datuk Seri Ismail Sabri Yaakob today gave contributions to the families of three Universiti Sultan Azlan Shah (USAS) students who were killed in a crash on the North-South Expressway northbound here at midnight on Wednesday.

The contributions were presented by the political secretary to the Prime Minister, Datuk Syed Mohd Fazmi Sayid Mohamad who represented Ismail Sabri at the accommodation venue provided by the Perak state government for the victims’ families here today.

“I am representing the Prime Minister to visit the families of the students who are still here on his instruction to hand over cash contributions as he is now in the United States for a meeting.

“The Prime Minister extends his condolences and hopes actions would be taken to identify the bodies sent to Taiping Hospital Forensic Unit today.

“We have contacted the relevant parties for burial as it is the hope of the families,” Syed Mohd Fazmi said when met by reporters after visiting the families of the crash victims.

He also expressed his appreciation of the Perak state government for the quick assistance rendered to the victims’ families including financial assistance and temporary accommodation while waiting for the post-mortem to be completed.

Last night, two of the five students of Universiti Sultan Azlan Shah (USAS) who were killed in a car fire at KM 245.2 of the North-South Expressway northbound here had been identified by their families via an autopsy at Kuala Kangsar Hospital.

The two bodies successfully identified were that of Ahmad Akmal Ahmad Mokhlis, 20, of Parit Buntar, Perak and he was believed to be in the rear seat as well as Ahmad Naim Najmi Ahmad Hafizan, 21, of Kemaman, Terengganu who was seated in front.

The three other victims were believed to be Muhammad Nasrun Aidol Munir Akbar, 22, who was driving, Muhammad Nabil Haikal Muhammad Fariz, 19, and Iqbal Hasnun Halimi, 23, in the rear seat and their remains have been sent to Taiping Hospital for further post-mortem today.

Earlier the Deputy Minister in the Prime Minister (Special Functions) Datuk Mastura Mohd Yazid who is also Kuala Kangsar MP, also visited the families of the victims and handed over her personal contributions.

‘Don’t be afraid’ of COVID, Trump says as he returns to...