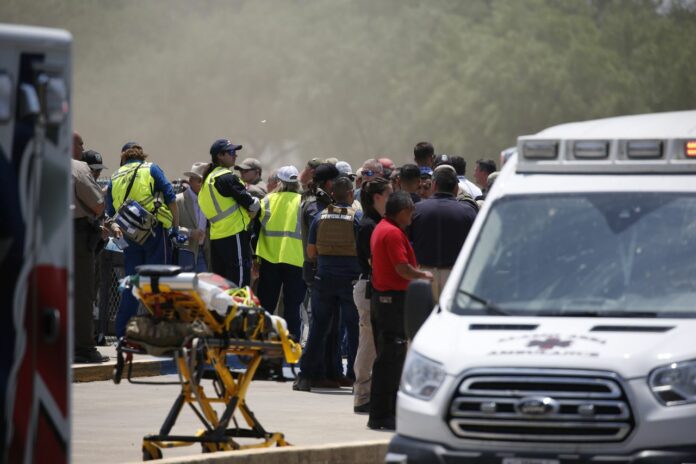 HOUSTON, May 25 — A gunman walked into an elementary school in Uvalde in the US state of Texas on Tuesday afternoon and killed 14 children and a teacher, Governor Greg Abbott said at a news conference.

The assailant was an 18-year-old man, who abandoned his vehicle and entered the school with a handgun and possibly a rifle, Abbott said, adding that “he shot and killed horrifically, incomprehensibly, 14 students and killed a teacher”.

Police are believed to have killed the gunman, who was identified by law enforcement sources as Salvador Ramos, Xinhua quoted an ABC report.

Two of the children who were shot had died by the time rescuers arrived at the Uvalde Memorial Hospital, Adam Apolinar, the hospital’s chief operating officer, was quoted by the New York Times as saying earlier in the afternoon.

The University Hospital in San Antonio received two patients from the shooting, tweeting that the patients, one child and one adult, “are currently being evaluated so we don’t have a condition to release at this time”.

The Uvalde Consolidated Independent School District in Texas said it wass cancelling all school activities after the shooting at the Robb Elementary School. “All district and campus activities, after-school programmes, and events are cancelled,” it tweeted.

The Bureau of Alcohol, Tobacco, Firearms, and Explosives (ATF) is assisting local police with the investigation into the shooting. “Special Agents from our Houston Field Division have responded to assist the Uvalde Police Department (UPD) in their investigation,” ATF spokesperson Erik Longnecker told CNN.

“President (Joe) Biden has been briefed on the horrific news of the elementary school shooting in Texas and will continue to be briefed regularly as information becomes available,” White House press secretary Karine Jean-Pierre tweeted.

Biden is on his way back to the United States after a five-day trip to South Korea and Japan. The White House said Biden would address the shooting upon his return, expected Tuesday evening.

Texas Attorney General Ken Paxton said that the solution to school shootings is arming teachers. Texas is one of the only states that permits districts to arm teachers, although it’s not clear how many districts have taken advantage of the provision.

Houston Mayor Sylvester Turner released a statement following the shooting, saying “In the last two weeks, at least 23 people have lost their lives in mass shootings in Buffalo, N.Y., and now Uvalde, Texas.”

“Congress must act, and governors and state legislators must pass reasonable gun control legislation. The voters must demand it from their representatives. How many more children must lose their lives from senseless gun violence?” the mayor asked.

Democratic Senator Chris Murphy of Connecticut delivered an emotional call to action on the Senate floor following the school shooting in Uvalde, saying that “our kids are living in fear every single time they set foot in a classroom because they think they’re going to be next”.