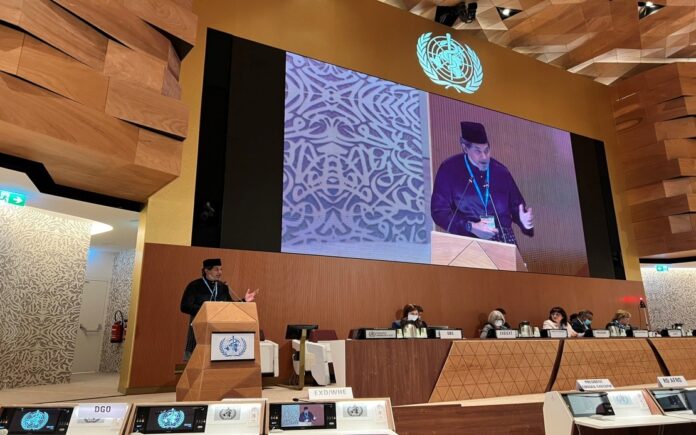 KUALA LUMPUR, May 24 — Malaysia supported the recommendations for sustainable financing that would make the World Health Organisation (WHO) fit for purpose, said Health Minister Khairy Jamaluddin.

He said Malaysia supported reforms towards an international health architecture that would avoid the moral failures in the response to COVID-19.

However, any amendments to the International Health Regulations would have to respect the principles of equity, accountability and transparency as well as the sovereign process of member states, said Khairy at the 75th Session of the World Health Assembly (WHA) in Geneva, Switzerland today.

“Yes, by all means hold member states accountable in disclosing key information on public health concerns, but let us also call for the disclosure of intellectual property and manufacturing know-how of vaccines, diagnostics and therapeutics.

“Let us put the mechanisms in place now for the fair and equitable distribution of resources needed in a pandemic. We should build back better, but equitably with no country left behind. In Malay we have a saying, berat sama dipikul, ringan sama dijinjing (heavy we shoulder together, light we hand-carry together). We must not only share in the pain but also share in the cure and recovery,” he said.

Khairy who was appointed as one of the five vice-presidents of the 75th WHA said: “Economic disruption caused by the lack of peace will plunge billions into poverty, and that will exacerbate socio-economic determinants of health and derail our vision of health for all.

“Planetary health continues to worsen and more than ever the health of the planet is inextricably linked to the health outcomes of human beings, with climate change having wreaked havoc on food supplies.

“The next zoonotic pandemic is no longer hypothetical but a near certainty and neglected tropical diseases such as dengue that affects countries like Malaysia is now a concern of other countries because of global warming.”

Khairy also said that the theme for this year’s assembly, ‘Health for Peace, Peace for Health’ could not be more timely as countries slowly emerged from the pandemic, hopeful for better days as the world now found itself in greater peril.

“War threatens humanity, both those directly affected by it and those staring at possible hunger unrelated to a conflict half way across the world.

“Malaysia thanks the director general for reminding us that the profound consequences of war on the health of human beings is happening not just where the news is focused on now, but in so many parts of the world where conflict is endemic, including in the occupied Palestinian territory where there is no end to oppression against the Palestinian people,” he added.

Concluding his speech, Khairy said Malaysia called on all health ministers and officials present at the assembly to be the voice of social justice in their respective governments and to fight for universal health coverage for all the people.

“Let us honour the sacrifices of our healthcare workers during the pandemic by demanding resources needed to build resilient healthcare systems, for health to be seen as an investment and not just a budgetary line item, and for us to better look after the physical, mental and spiritual well-being of our people and the health of our shared planet,” he said.