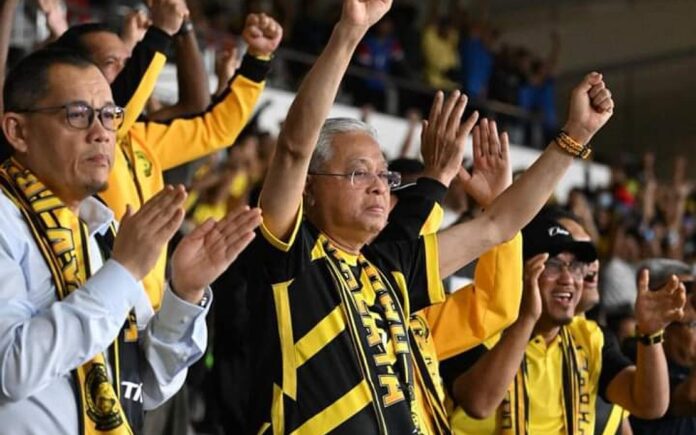 KUALA LUMPUR, June 14 — Prime Minister Datuk Seri Ismail Sabri Yaakob praised and congratulated the Harimau Malaya squad on their qualification to the 2023 Asian Cup finals, ending the 43-year wait to compete in the finals of the prestigious cup.

The prime minister expressed his pride in the national squad, who fought till the final whistle to down Bangladesh 4-1 in their final Group E match of the 2023 Asian Cup qualifiers at Bukit Jalil National Stadium here tonight.

“Malaysia has created history! Congratulations also to our diehard supporters. We will continue our quest at the 2023 Asian Cup!,” the prime minister posted on his Facebook page.

Ismail Sabri, who also watched the match, cheered the team with every goal scored.

He also said that their performance tonight was very good and satisfying.

When met by reporters after the match, Ismail Sabri said he was grateful for tonight’s victory, and thanked the hardworking players who fought for the win.

He also thanked Malaysian fans, both at the stadium and those watching from home, who continued to support the national team.

“I pray that after the qualifiers, we can give a great surprise to all Malaysians by succeeding at the Asia Cup finals,” he said.

Malaysia has finally qualified by merit for the 2023 Asian Cup finals after trying for over four decades.

The last time Malaysia made an appearance at the Asian Cup finals was in 2007 as joint hosts, having failed for 42 years to qualify on merit since 1980 in Kuwait.

That came to an end tonight with Malaysia’s 4-1 victory.