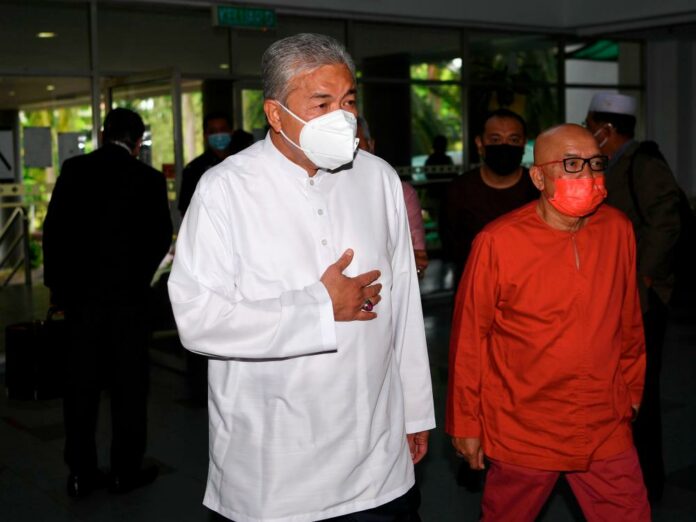 KUALA LUMPUR, June 17 — Datuk Seri Dr Ahmad Zahid Hamidi has claimed that his five meetings with Tun Dr Mahathir Mohamad from 2018 to 2020 were not to discuss criminal cases against him but was to resolve the political issues in the country at that time.

Ahmad Zahid, 69, claimed that during several of the meetings, Dr Mahathir suggested and urged him to dissolve UMNO and that UMNO members (especially UMNO MPs and assemblymen) to join Dr Mahathir in Parti Pribumi Bersatu Malaysia (Bersatu).

The five meetings were held between June 7, 2018 and Feb 25, 2020 at several locations, including Perdana Leadership Foundation in Putrajaya.

Ahmad Zahid, who filed a response to Dr Mahathir’s statement, claimed that the meetings with Dr Mahathir was not only attended by himself, but by other UMNO supreme council members at that time, including Datuk Seri Mohamad Hasan, Datuk Seri Ismail Sabri Yaakob and Datuk Seri Mahdzir Khalid.

Ahmad Zahid alleged that the meetings were held after UMNO grassroot members agitated for change in the party’s direction and also discussed possible cooperation, both in the short term and long term, between UMNO and Bersatu.

“At the meetings, however, the defendant (Dr Mahathir) urged me to dissolve UMNO and join Bersatu.

“Therefore, the defendant’s claim that I was making an effort to discuss about the criminal cases against me are untrue and baseless,” Ahmad Zahid alleged in his response filed on May 31.

On May 17, Dr Mahathir alleged in his defense statement that Ahmad Zahid had voiced his concern over criminal cases he faced during several meetings they had between 2018 and 2020.

In a lawsuit filed on April 20, Ahmad Zahid said he was charged at the Sessions Court here with 12 counts of criminal breach of trust (CBT), eight counts of bribery and 27 counts of money laundering on Oct 18, 2018 and all charges were on trial at the High Court.

Ahmad Zahid claimed that Dr Mahathir made slanderous statements against him at a Parti Pejuang (Pejuang) event in the run up of the 15th Johor state election at Perdana Leadership Foundation in Putrajaya on Feb 23, 2022.

The Bagan Datuk MP claimed that defamatory statements made against him implied that he was trying to use shortcuts to resolve or postpone his ongoing criminal cases and to use his position and influence to induce Dr Mahathir to intervene in criminal proceedings and interfere with the investigation conducted by enforcement agencies against him.

Ahmad Zahid also filed an inter-parte motion for an interim injunction so that the defendant withdraw the slanderous statements and to stop them from publishing, distributing or circulating the statement or any similar defamatory statements on any social media platform.

Ahmad Zahid’s counsel, Shahrul Fazli Kamarulzaman, informed when contacted that the court decided during today’s case management that the inter-parte motion would be heard on July 5.