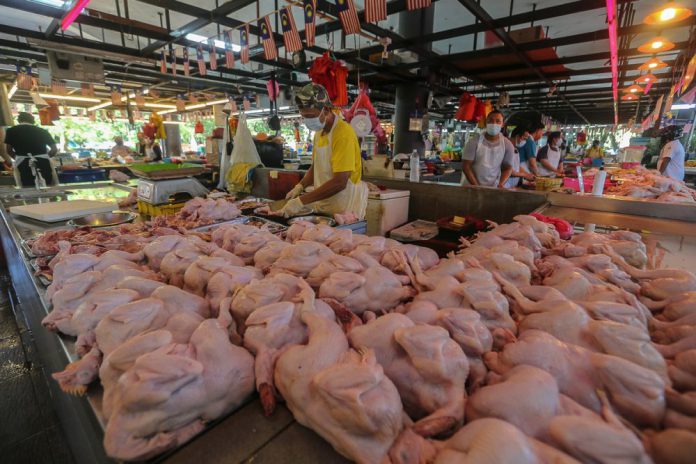 KUALA LUMPUR, June 25 — The announcement made by Prime Minister Datuk Seri Ismail Sabri Yaakob yesterday that market prices for chicken will not be floated was welcomed by traders, consumers and industry players.

At the same time, they hope that the new ceiling prices to be announced by the Agriculture and Food Industries Ministry soon will not burden consumers in dealing with the rising cost of living.

Federation of Malaysian Consumers Associations (FOMCA) deputy president Mohd Yusof Abdul said the government’s move was seen as an effort to alleviate people’s burden as the floating of chicken prices could result in higher prices.

“At the same time, FOMCA hopes that the new ceiling prices can create a win-win situation for all quarters. The price should be reasonable for consumers while breeders should be able to cover their production costs,” he said when contacted today.

Mohd Yusof said as a long-term measure, the government needs to ensure that the country’s staple food production is increased so that the supply and self-sufficiency levels are higher than they are now and there is no need to rely too much on food imports.

Meanwhile, in PERAK, chicken trader Muhammad Qusyairi, 30, said the government’s move not to float the prices of chicken brought relief to many and hoped the government would continue to listen to the grouses of the people on issues related to food supply.

Another chicken industry player in the state, Megat Fitri Hazheem, 25, said he hoped the government would ensure that the new ceiling prices are affordable for everyone.

“When the price is too high, customers will resort to buying fish, shrimp and vegetables so we will suffer losses. However, thank you to the government for deciding not to float the price for chicken supply,” he said.

In MELAKA, Federation of Livestock Farmers’ Associations of Malaysia (FLFAM) advisor Datuk Jeffrey Ng said the previous disruption in chicken supply was due to high demand in certain seasons only.

“The supply of chicken is more stable now because the festive season and feasts are over. It is expected that the supply will gradually recover after this.

“I am confident that it will return to normal because even farmers do not want to keep chickens on their farms for a long time. That will cause them to suffer higher losses,” he told Bernama when contacted.

In PAHANG, a chicken trader at Pasar Besar Kuantan, Muhammad Fairuz Abdullah, 43, said that chicken supply has stabilised and suppliers were able to send between 450 and 500 birds a day as requested.

He said the supply has increased after the government imposed a ban on chicken exports from June 1, causing farmers or companies involved to focus on local sales.

“We have also started delivering fresh chicken directly to customers’ homes over the past few days. Previously, we weren’t able to do so because there was insufficient supply,” said Muhammad Fairuz, who has been selling chicken for six years.

He also hoped that the new ceiling price to be announced would take into account the prices set by suppliers so that traders could still make a reasonable profit.

A restaurant operator in Kampung Melayu Subang, Maliah Razak, in her 50s, said she wanted to wait for the announcement of the new ceiling price before deciding on whether to continue selling chicken rice or not.

Currently, the government sets the maximum retail price of chicken and eggs for Peninsular Malaysia at RM8.90 per kg for standard chicken and RM9.90 per kg for super whole chicken (slaughtered and cleaned without legs, head, liver and gizzard).