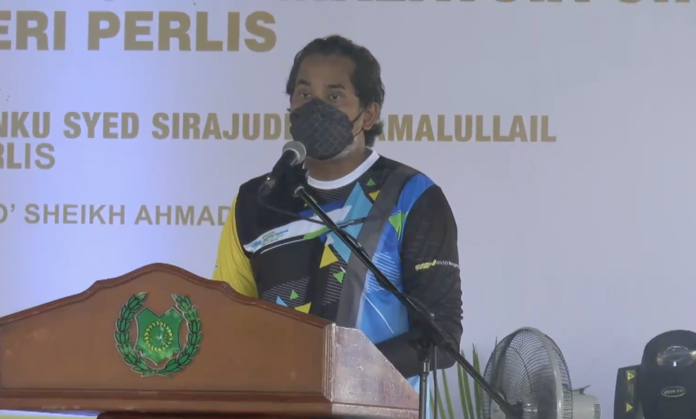 KANGAR, June 25 — Perlis has become the first state to successfully implement the Agenda Nasional Malaysia Sihat (ANMS) with flying colours, and can be emulated as a role model, said Health Minister Khairy Jamaluddin.

He said ANMS had started in Perlis, through a vision brought by the Raja Muda of Perlis, Tuanku Syed Faizuddin Putra Jamalullail, through the Kampung Seberang Ramai cycling and transformation programme.

“If we want to see the successful implementation of ANMS, we do not have to look far because we have it all here (Perlis),” he said when speaking at the opening of the Perlis ANMS at Dataran Dato’ Sheikh Ahmad today.

Khairy said that the cycling tour, under the patronage of the Raja of Perlis, was not just cycling but also visiting villages around the state, such as the Kampung Seberang Ramai (also known as Kampung Warna-Warni).

“Based on the vision of His Royal Highness (Raja Muda of Perlis) we can see the transformation of a traditional village, not only beautiful with colourful decorations that can be a tourist attraction but also can address the problem of environmental cleanliness in the village.

“The transformation of the village can also overcome personal health problems, as well as economic problems and poverty eradication, under the entrepreneurship programme brought by the Perlis Islamic Religious and Malay Customs Council (MAIPs),” he said.

“They are no longer too worried about poverty so they can focus on their health,” he said.

He said that the question of environmental hygiene was also important because the environment was a determinant of health to reduce the threat of disease.

“His Royal Highness’ vision of transformation to a clean environment helps the health of the people of Perlis,” he said.

Meanwhile, Khairy also advised people in Perlis, especially the elderly, to immediately take booster doses to protect themselves from the COVID-19 threat.

He said thus far, only about 43 per cent of the adult population in the state was recorded to have taken the booster dose.

“If there is a new wave, those aged 70 and below will only get the common cold, but for the elderly, they are at risk due to the low level of immunity,” he said.

He added that while the country is in a transition phase to endemic at the moment, it is likely that there will be a new wave of infection from time to time.

“Although the number of cases may increase, the situation will not be so bad,” he said.