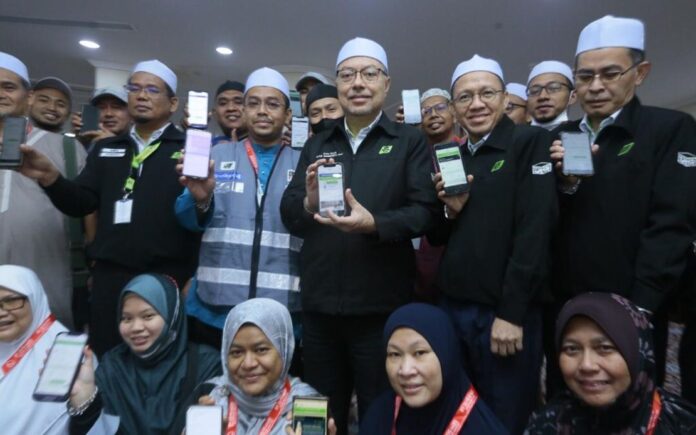 MAKKAH, July 4 — Malaysian haj pilgrims can now refer to religious issues as well as current information, such as weather, location and maps in Makkah and Madinah, via the THhujjah application.

The THhujjah application, developed by Lembaga Tabung Haji (TH), has facilitated Malaysian haj pilgrims during their pilgrimage in the Holy Land.

One of the pilgrims, Abang Muhammad Faidy Razak, said that he had uploaded the application when he was still in Malaysia to get information on the flight schedule and accommodation location.

“I found this application provides a lot of interesting information for haj pilgrims. For example, about the weather conditions in Madinah and Makkah, prayers times, and there is also a feature for pilgrims to ask questions about religious rituals to experts.

“The part that I like the most about THhujjaj is the hadith sharing feature, as the admin will post different hadith every day,” he said when met by reporters, after the launch of the application at the Qsar Al Janadriah building, which houses Malaysian haj pilgrims.

Another pilgrim, Nur Hidayah Din Hatt Abdullah, said that the application helped her obtain information related to movements in Madinah and Makkah and the Wukuf Day, which will arrive in four days.

“It is very helpful … there is also a haj guidance course. Upon arriving in the Holy Land, we knew where the movement was, room numbers and hotels.

“I like this app the most because it provides locations … to know my exact location, the distance to the hotel. While in Mina, I will be able to find out the location of the place to perform the stoning of the devil rituals,” she said.

Meanwhile, Malaysian Haj Delegation head, Datuk Seri Syed Saleh Syed Abdul Rahman, said that the THhujjaj application was the first to be implemented during the haj season, and it was specially created to facilitate pilgrims once they accepted the offers to perform haj.

“With THhujjaj the pilgrims do not need to look elsewhere, because comprehensive information can be obtained from this application.

“Then, once the pilgrims start to move to Arafah, Muzdalifah and Mina, all the information will be available in this application. They can also review the haj guidance because there are notes and videos related to rituals, basic and premier haj courses,” he said.