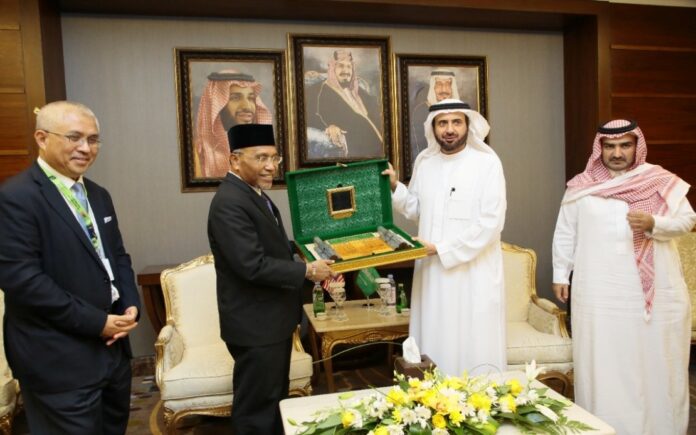 MAKKAH, June 5 — It was indeed a proud moment for Malaysia when not once, but more than 10 times the country’s name was mentioned with words of praise and appreciation at the Grand Haj Symposium here on Monday.

The symposium, which brought together leaders from various Islamic countries, also witnessed the recognition given to the Malaysian haj pilgrims fund board, Lembaga Tabung Haji (TH) for its success in developing the most proper and up-to-date management system for every haj season.

More proudly, the recognition, praise and appreciation came from the Saudi Arabian Minister of Haj and Umrah Dr Taufiq Fawzan Al-Rabiah himself, both in his speech at the symposium and also in his exclusive statement to the Malaysian media here.

Among others, he said it was only right that other countries learn the strategies undertaken by Malaysia in preparing and educating its pilgrims prior to performing the fifth pillar of Islam.

“We appreciate what the Malaysian government has done in preparing, educating and training the haj pilgrims from Malaysia…it makes haj pilgrimage successful and safe.

“We always look forward to any cooperation with the Government of Malaysia. We are honoured for all cooperation we have forged together and I plan to visit Malaysia very soon, InsyaAllah,” he said after meeting with the Malaysian Minister in the Prime Minister’s Department (Religious Affairs) Datuk Idris Ahmad here.

Taufiq Fawzan also said that early preparations and training during a series of focused courses organised by TH had helped Malaysian pilgrims to perform haj easily despite the many expected challenges while in ihram.

“The training by the Malaysian government definitely should be followed by other countries. We appreciate the great impact the Malaysian pilgrims made.

“The proper training they received enabled them to know what to do and where to go. It’s indeed a good example,” he said.

In this context, the academic from Guinea who had stayed in Kuala Lumpur for 16 years while serving as a lecturer at the Malaysian International Islamic University, also said that it was high time for other countries to learn from Malaysia.

“Congrats Malaysia for this achievement. Many Muslim countries today are willing to learn from Tabung Haji’s experience. It’s the best in the world,” he said.

The professor was one of the panellists at the symposium.