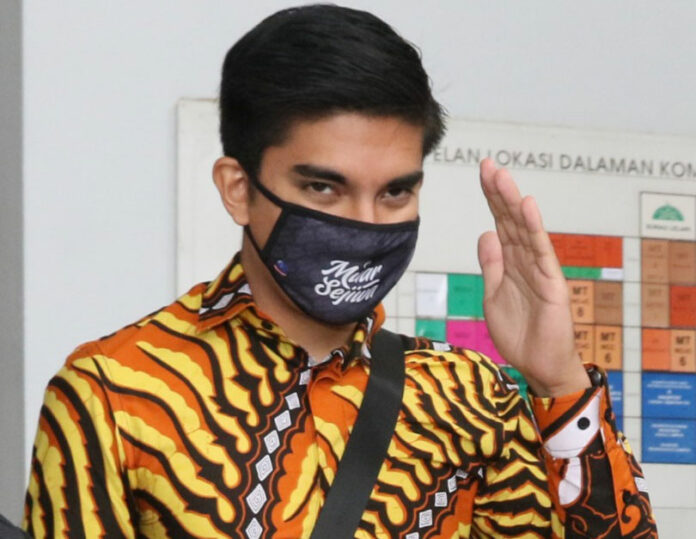 Rafiq Hakim Razali, 32, said he received a WhatsApp call from Syed Saddiq around March and the end of April saying that the MACC had conducted an inspection and search at the politician’s residence.

“He (Syed Saddiq) instructed him to ‘clear’ the money which I was holding at that time, and because of this, I distributed it to Naqib and Daniel,” he said during examination-in-chief by deputy public prosecutor Datuk Wan Shaharuddin Wan Ladin at the trial of Syed Saddiq, who faces four charges relating to criminal breach of trust (CBT) and money laundering.

To a question by Wan Shaharuddin as to why Syed Saddiq asked him to ‘clear’ the money, Rafiq Hakim replied: “He (Syed Saddiq) was afraid the money would be confiscated.”

The witness said the RM1 million was kept in his house before being distributed to Muhammad Daniel and Muhammad Naqib.

Rafiq Hakim: In the area around my house.

Rafiq Hakim: The money came from the Parti Pribumi Bersatu Malaysia Armada account (and) from a withdrawal of RM1 million.

Rafiq Hakim: To my recollection, I used it for Armada programmes and those were all instructions from YB Syed Saddiq.

Asked if he would have withdrawn the money if he had not received any instruction from Syed Saddiq to do so, Rafiq Hakim replied: “No”.

He said prior to making the RM1 million withdrawal, Syed Saddiq had asked him for the account balance, to which he replied that there was about RM1.8 million.

When asked by Wan Shaharuddin whether Rafiq Hakim understood what was meant by the MACC investigation, Rafiq Hakim replied: “At that time there was the case of the missing RM250,000 and the MACC had come to YB Syed Saddiq’s house to investigate”.

Rafiq Hakim said he only knew that Syed Saddiq had lost RM250,000 from his house safe, adding that the politician did not state that the money belonged to his parents or to pay for house renovation use, but only that it was from political donations.

To another question, the witness said he was still friends with Saddiq, and had even met the politician during Ramadan recently where they discussed a Baju Melayu project in Syed Saddiq’s house.

Wan Shaharuddin: At that time, did he (Syed Saddiq) say anything about the order not to meet any (case) witnesses?

Syed Saddiq, 29, is charged as the then Bersatu’s youth wing or Armada chief — who was entrusted with control of Armada funds — with abetting Rafiq Hakim Razali, Armada’s assistant treasurer at the time, with CBT of RM1 million in funds belonging to the wing at CIMB Bank Bhd, Menara CIMB KL Sentral, Jalan Stesen Sentral 2, here on March 6, 2020.

For the second charge, the accused is charged with misusing property for himself, namely RM120,000 from the Maybank Islamic Bhd account belonging to Armada Bumi Bersatu Enterprise, by causing Rafiq to dispose of the money at Malayan Banking Bhd, Jalan Pandan 3/6A, Taman Pandan Jaya here, between April 8 and 21, 2018.

He also faces two counts of engaging in money laundering activities, namely two transactions of RM50,000, believed to be proceeds of unlawful activities, from his Maybank Islamic Bhd account into his Amanah Saham Bumiputera account at a bank in Jalan Persisiran Perling, Taman Perling, Johor Bahru, on June 16 and 19, 2018.

Ismail Sabri thanks King for appointment as ninth Prime Minister