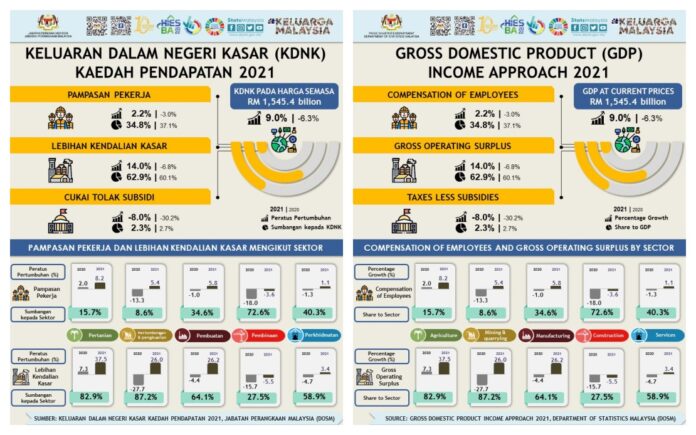 KUALA LUMPUR, July 26 — The income component accruing to production namely compensation of employees (CE) and gross operating surplus (GOS) has contributed 34.8 per cent compare with 37.1 per cent in 2020 and 62.9 per cent from 60.1 per cent of gross domestic product (GDP) respectively as the economy is on a gradual recovery path, said the Department of Statistics Malaysia (DOSM) today.

Chief statistician Datuk Seri Dr Mohd Uzir Mahidin said the remaining share of GDP contributed by net taxes accounted for 2.3 per cent in 2021 from 2.7 per cent in 2020.

The CE, which broadly refers to remuneration received by employees for the provision of labour services in the production of goods and services, rebounded to 2.2 per cent in 2021 as against a decrease of 3.0 per cent in the previous year, he noted.

The services sector remained the largest contributor to the total CE which generated 62.8 per cent, followed by the manufacturing sector accounted for 23.3 per cent, construction and agriculture sectors at 7.5 per cent and 4.3 per cent respectively.

The remaining sector, mining and quarrying formed 2.0 per cent of the total CE in 2021.

The CE in the services sector grew 1.1 per cent in 2021 against -1.3 per cent in 2020, attributed to the transportation and storage as well as the information and communication sub-sector.

It also grew significantly in the manufacturing sector at 5.8 per cent compared to -1.0 per cent in the previous year, impelled by the CE in electrical, electronic, and optical products while CE for the agriculture sector accelerated to 8.2 per cent in 2021 from 2.0 per cent, mainly reflected by the higher commodities prices.

CE in Mining and quarrying sector improved to 5.4 per cent compared to a contraction of 13.3 per cent in 2020, however, CE in the construction sector remained decreased by 3.6 per cent as compared to a decline 18.0 per cent in the preceding year.

The GOS, which is the largest income component of GDP, registered a double-digit growth of 14.0 per cent from a decline of 6.8 per cent in the previous year and it was the highest ever recorded since 2010 at 16.0 per cent, said DOSM.

In addition, the GOS has also surpassed the pre-pandemic level by RM57.3 billion or 6.3 per cent increase in 2021 contributed by all sectors except for the construction sector.

DOSM said the GOS in the services sector rebounded to 3.4 per cent from -4.7 per cent in 2020 attributed to wholesale and retail trade, food and beverage as well as accommodation sub-sector.

In the manufacturing sector, GOS strengthened to 26.2 per cent from -4.4 per cent in 2020, driven by robust growth in petroleum, chemical, rubber, and plastic products.

Likewise, GOS in agriculture sector surged to 37.5 per cent from 7.3 per cent in 2020, supported by the expansion in rubber, oil palm, livestock and other agriculture subsectors.

As for the Mining and quarrying sector, GOS rebounded to 26.0 per cent from -27.7 per cent in 2020, owing to the higher petroleum prices, while GOS in the construction sector pared down its decline at 5.5 per cent as compared to a contraction of 15.7 per cent in the previous year.

The services sector accounted 50.8 per cent of total GOS followed by the manufacturing sector with a contribution of 23.9 per cent, while agriculture, as well as mining and quarrying sectors, formed 12.6 per cent and 11.1 per cent respectively.