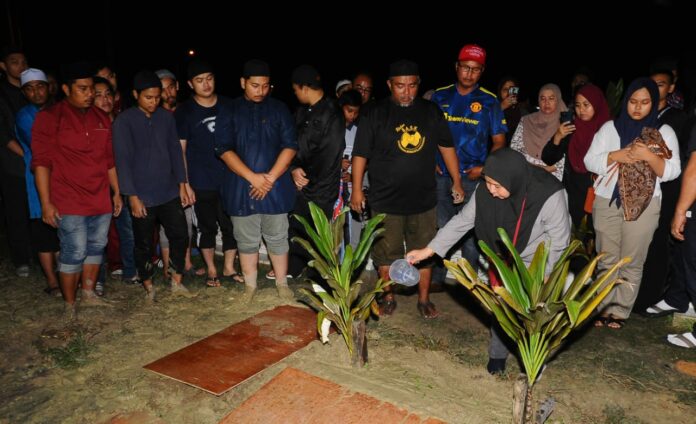 PASIR GUDANG, July 26 — “Alhamdulillah, everything is settled now. I feel so relieved….My son has been returned to his Creator,” said  Azmawati Ab Kadir, 55.

She was met early today at the Kampung Pasir Putih Muslim Cemetery, where her eldest son, Muhammad Iman Aqmar Dzulkarnain , who went missing for 10 months before his remains were found trapped in a car that was pulled out of Sungai Api-Api in Nenasi, Pekan, two days ago, was buried.

“Thank you Allah for lending him to me for 24 years. Alhamdulillah, he was a good son,” said the woman, who was accompanied by her youngest child, Nurul Izz Anisah Dzulkarnain, 21, and the deceased’s fiancee, Nurfaizah Mahadi, 25.

More than 100 family members and friends attended Muhammad Iman Aqmar’s funeral which was held at about 1 am today.

His remains, discovered in a Nissan Grand Livina that was found in Sungai Api-Api two days ago, were sent to the Tengku Ampuan Afzan Hospital in Kuantan for a post-mortem, and then brought home to his family home in Taman Air Biru, here, for the funeral.

On Oct 30 last year, Asmawati filed a police report on the disappearance of Muhammad Iman Aqmar after failing to contact him since he left their home in Johor for work in Kemaman, Terengganu, a day earlier.

Pekan police chief Superintendent Mohd Zaidi Mat Zin said Muhammad Iman Aqmar’s remains were discovered in a Nissan Grand Livina car by an elderly man while he was doing some work near the riverbank.

The car had damage to the front, left and right, and an inspection inside found a body covered in mud and a worker’s pass registered in the name of Muhammad Iman Aqmar, he said.

Landslide: Four bodies found rolled up in a tent – Police