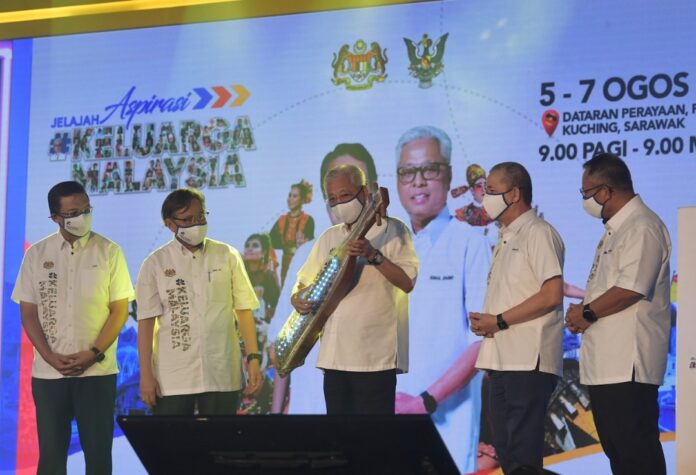 KUCHING, Aug 7 — Prime Minister Datuk Seri Ismail Sabri Yaakob is confident that Sarawak’s target to be a developed state by 2030 can be achieved under the leadership of Sarawak Premier Tan Sri Abang Johari Tun Openg.

He said in addition, the federal government will continue to prioritise the development of Sarawak and this is proven by the development expenditure allocation of RM4.55 billion provided under the Second Rolling Plan of 2022 of the 12th Malaysia Plan (12MP).

“Apart from that, to ensure the comfort and convenience of future generations, an allocation of RM5.77 billion has been provided under 12MP to develop and upgrade schools and educational institutions in Sarawak,” he said in his closing speech at the Keluarga Malaysia Aspirations (AKM) Tour Sarawak chapter here today.

According to him, out of 409 new development and extension projects, 111 of them are now fully completed, 109 are at the implementation or construction stage and another 189 are in the pre-construction phase.

“An allocation of RM2.16 billion has also been provided to cover 361 projects to upgrade and rebuild schools with dilapidated buildings,” he said.

In addition to BMTKM, he said a total of 867,967 families in the state had received benefits through the Bantuan Keluarga Malaysia (BKM) initiative which involved an allocation of RM745 million.

“This proves the government’s commitment to the Malaysian Family in Sarawak,” he said, adding that the RM16.1 billion Pan Borneo Highway project which was launched in March 2015, is now at 85 per cent and is expected to be fully completed in the first quarter of next year.

He added that the government will also continue with the second phase of the Sarawak Sabah Link Road (SSLR) project which will connect Miri to Limbang and Lawas without having to go through Brunei.

“This SSLR phase two project from Simpang Gelugus to Long Lopeng in Lawas will connect Mulu to Long Merarap for a distance of 326km at a cost of RM7.68 billion. Construction is expected to start early next year,” he said.