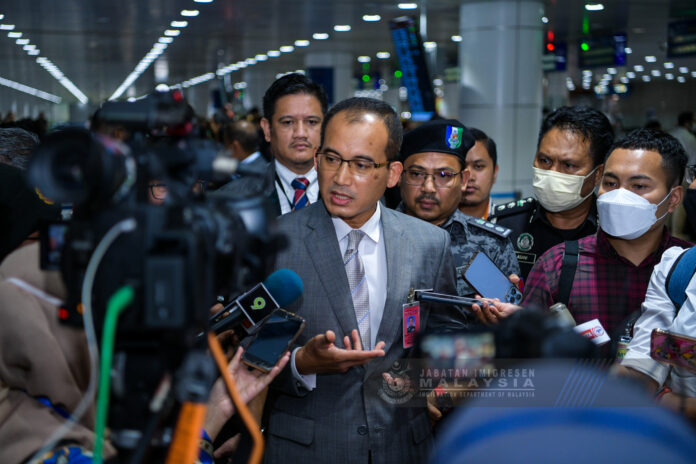 A one-minute video clip on TikTok in the past few days claimed that the Indian citizens were given poor treatment at klia2 including being forced to sit on the floor and having to go through long entry processes despite having complete documents.

Khairul Dzaimee clarified that investigations found the travellers did not go to the Immigration counter directly and were loitering in the arrival area for almost three hours while some were hiding in the toilets which raised the suspicions of the enforcement.

“Immigration will receive the initial flight manifest and we know that in a certain flight, how many are foreigners. But when they did not approach the counter (Immigration) after two to three hours, our officers went to look and found them and they were taken to the operation room for investigation,” he told reporters after an engagement session between JIM with tourism agencies at Kuala Lumpur International Airport here today.

After being questioned, it was found the Indian nationals came to Malaysia not as tourists but were looking for employment illegally as they have no place of accommodation and did not have sufficient pocket money and these were clearly in violation of the social visit pass, he said.

Khairul Dzaimee said all of the travellers have returned to India and they were given Not-To-Land (NTL) notices besides being blacklisted from entering Malaysia after this.

On NTL statistics from January 2022 to date, he said 34,786 individuals were given the NTL notices covering 4,207 travellers in KLIA.

“And from the total, the countries with the most NTL record involved the citizens of Bangladesh, followed by Pakistan, India, Nepal and Vietnam,” he said.

In another development, Khairul Dzaimee said the Immigration Department is developing the National Integrated Immigration System (NIISe) which is expected to be operational in early 2024.

NIISe will be replacing the Malaysian Immigration System (myIMMs) which has already been in operation for more than 20 years and would add value to the existing system.

The new system among others is equipment with the generation of a unique identity for each visitor upon arrival at the checkpoint through fingerprint and facial biometrics which would contribute to effective enforcement digitally in future.