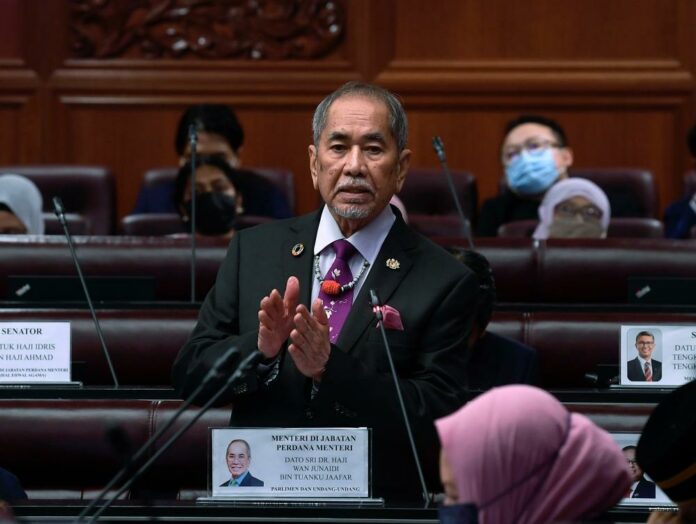 KUALA LUMPUR, Aug 9 — The constitutional amendments to prohibit Members of Parliament (MPs) from switching parties are expected to be enforced in the middle of September at the latest, said Datuk Seri Dr Wan Junaidi Tuanku Jaafar.

The Minister in the Prime Minister’s Department (Parliament and Law) said this expectation was consistent with the timeline set out on the tabling and approval of the constitution amendment bill, which requires the consent of Yang di-Pertuan Agong Al-Sultan Abdullah Ri’ayatuddin Al-Mustafa Billah Shah.

“I am very confident that His Majesty is sensitive to this bill, and if my reading is right, not later than middle of September (its enforcement).

“Of course, we are hoping (for it to be enforced before the 15th general election). I can’t predict but once we have sent to Istana, we need to give time to His Majesty to study the bill before giving his consent,” he told a press conference at Parliament building today.

He said this when asked on the time frame for the bill to become law and whether it could be enforced before GE15 is held.

Earlier, the Dewan Negara had passed the Constitution (Amendment) Bill (No. 3) on anti-party hopping by MPs with a more than two-thirds majority, after obtaining the support of 52 of 60 senators in two rounds of bloc voting.

Wan Junaidi said after being passed, the bill would now go through the process of assent by the King in accordance with Article 66 of the Federal Constitution before it could be gazetted into law and enforced.

The government would hold engagement sessions with stakeholders like political parties, non-governmental organisations and civil society to discuss the proposal, he said.

He said the matter needed to be studied carefully because countries which conducted recall elections had also faced their own set of problems in its implementation.

No official application made to organise carnival – MB Selangor