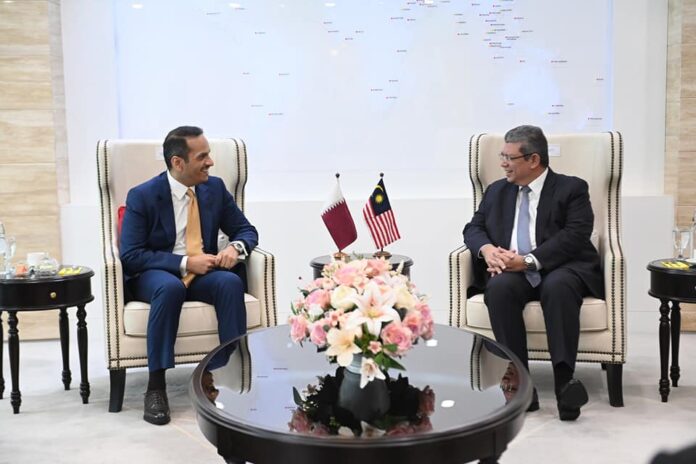 PUTRAJAYA, Aug 12 — Malaysia and Qatar aim to bring their bilateral relationship a notch higher through cooperation in new areas like Islamic financing and digital economy.

Foreign Minister Datuk Seri Saifuddin Abdullah said as international trade is becoming more complex by the day, both sides need to think of new ways in doing things besides the normal bilateral relationship.

He cited an example that Baladna, a Qatari dairy producer, has joined forces with Malaysia’s FGV Integrated Farming Sdn Bhd which will see the development of the biggest dairy farming business in the region with two sites identified, in Perlis and Pahang.

Meanwhile, Sheikh Mohammed said he is happy looking at the pace of bilateral trade growth and investment by both countries, adding that Qatar Investment Authority and Qatari private companies view favourably the Malaysian economy.

He said Qatar also welcomed the recent agreement signed by Qatari companies to establish their presence here, and invited Malaysian companies to operate and use Qatar facilities and infrastructure as a hub for them in the region.

On the economic relationship between both countries, Sheikh Mohammed said more could be done as it is yet to achieve the aspiration of Qatari leadership.

The deputy prime minister said both Malaysia and Qatar agreed to work together in rendering  humanitarian assistance in conflict zones like Palestine and Afghanistan.

He hoped that the Taliban ruled Afghanistan would provide access to education to everyone regardless of gender.

“The situation in Afghanistan is a concern for us and we are very much disappointed on some of the measures taken on Afghan girls and women, and we hope the Taliban caretaker government will reverse those measures and give everyone access to education,” he said.