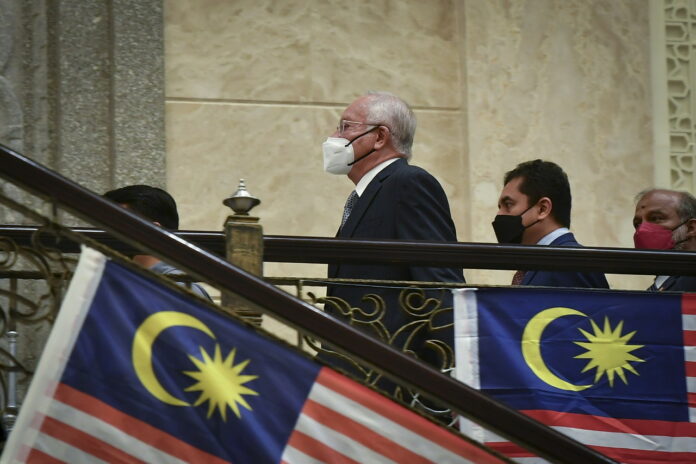 Counsel Alan Adrian Gomez, representing Thomas, said the lawsuit filed by Najib was an abuse of the court process and cannot be relied on because the four criminal trials are a type of proceedings that can be determined in Najib’s favour.

“The grounds that support the application or the major claim against his client are clearly scandalous, frivolous, vexatious and constitute an abuse of processes over the court.

“The plaintiff (Najib) has no reasonable cause of action against defendants and his claim against this defendant is an action that’s obviously unsustainable and should be struck out,” he said in the hearing of Thomas’ application to strike out Najib’s suit.

In summarising his submission, Gomez further said the elements of recklessness and abuse in a claim for misfeasance would require a determination as to whether Thomas, in preferring the charges, had abused his powers or was reckless or indifferent as to whether such actions would harm Najib.

“These necessarily relate to the merits of the case. The four criminal cases against Najib have yet to be determined. In any event, these particulars as to how my client was reckless or had abused his powers have not been traversed in Najib’s statement of claim,” he said.

Gomez also argued that if Najib was of the view that the 1MDB charges against him were wrong, the Pekan MP should have commenced judicial review proceedings to strike them out, citing the process employed by former Asian International Arbitration Centre (AIAC) director Datuk Prof Dr N. Sundra Rajoo, in an unrelated case.

Meanwhile, lawyer Datuk Firoz Hussein Ahmad Jamaluddin representing Najib argued that Thomas’ submission does not address the suit brought against him, but rather was an attempt to divert the case towards the criminal charges faced by his client.

Firoz Hussein said Najib’s statement of claim to this action does not plead any facts which concern his guilt or innocence in the criminal cases.

— MORE“Rather, the facts pleaded revolve around how the defendant was pre-planning charges against Datuk Seri Najib since 2012 and while he was doing this, he also lobbied to be the Attorney-General, should there be a change in government.

“Thomas interfered and influenced investigations against Datuk Seri Najib and after the charges were preferred against my client, he (Thomas) consistently made public remarks about him. He did this in press statements and in a book he wrote, My Story: Justice In The Wilderness,” he said.

Firoz Hussein further submits that Thomas also had suppressed evidence that could have aided Najib’s defence in the criminal cases.

On Oct 22, 2021, Najib filed the suit, claiming that the charges against him were part of a move that had been planned in advance by Thomas and it was also in line with the Pakatan Harapan government’s plan at the time.

Najib, 69, claimed that he had been wrongly accused in court in the case of 1MDB, International Petroleum Investment Company (IPIC), abuse of power under the Malaysian Anti-Corruption Commission (MACC) Act 2009 and money laundering under the Anti-Money Laundering, Anti-Terrorism Financing and Proceeds of Unlawful Activities Act 2001 (AMLATFPUAA 2001).

He is seeking a declaration that Thomas has committed misfeasance in public office as well as RM1.9 million in damages including negotiation fees for the audit team to review documentation for the preparation of facts to deal with the prosecution against him.

The hearing before Judge Datuk Ahmad Bache continues on Oct 21.