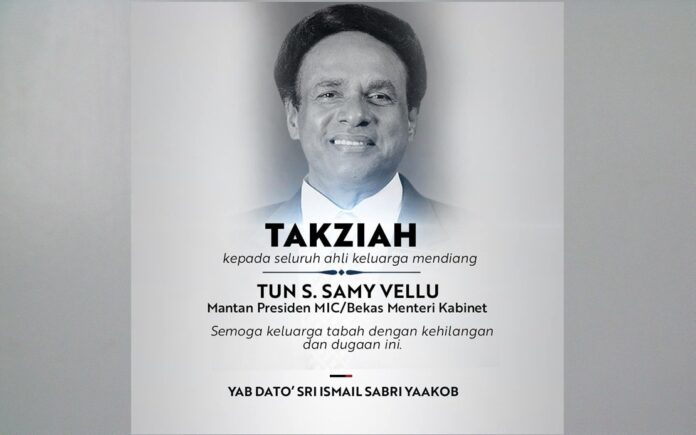 He said the late Samy Vellu previously succeeded in uniting the Indian community in Malaysia, apart from championing the fate of the community.

“We have lost a great leader. Tun Samy Vellu has been considered the ‘father of unity’ for the Indian community.

“When Tun Samy Vellu was the president of MIC, he managed to unite the Indian community in Malaysia and always championed their interests including in terms of economy and others. The country has lost a great leader today,” he said when met after the Semarak Patriotik IPT 2022 at Universiti Pertahanan Nasional Malaysia (UPNM) here today.

Samy Vellu died at his residence here, around 7 this morning.

Samy Vellu who led MIC from 1981 to 2010, was one of the longest serving leaders in the Cabinet, which is about three decades, starting as Public Works Minister in 1979.

Meanwhile, Ismail Sabri in a post on his official Facebook account, conveyed his condolences to the family of the late Samy Vellu, and that the services of the former MIC president will continue to be remembered.

“This morning I received the sad news about the passing of Samy Vellu, former MIC president and also the longest-serving former Cabinet minister, starting as Minister of Public Works from 1979 to 1989 and 1995 to 2008.

“He was also the Minister of Energy, Telecommunications and Posts from 1989 to 1995,” he said.

The Prime Minister said the late Samy Vellu also played a role in the development of the road network in the country.

He also described the former Sungai Siput member of Parliament who served the constituency for eight terms from 1974, as a fighter as well as the father of the unity for the Indian community and as a mentor to MIC leaders.

“He made various contributions to the country and the Indian community such as the establishment of the Maju Institute of Educational Development (MIED); Aimst University and Tafe College, which helped to improve the lives of the people in this country,” said Ismail Sabri.

Hasni ready to contest for Parliamentary seat in GE15