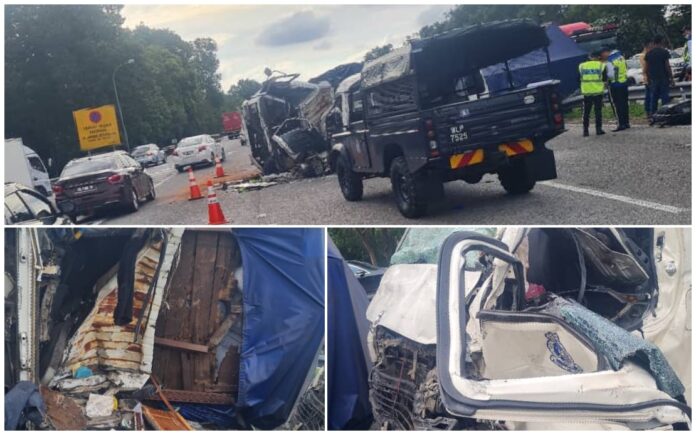 SEREMBAN, Sept 22 — A lorry driver died while 12 were injured including seven policemen in a four-vehicle accident on Kilometre 225, of the North-South Expressway (NSE) northbound here this evening.

Rembau police chief DSP Hazri Mohamad said initial investigation found the lorry carrying a load of paint was on its way from Senawang heading towards Ayer Keroh, Melaka and it was moving in the middle lane before it switched to the right lane and crashed into a Toyota Camry and Perodua Alza.

“The lorry later hit the highway divider and entered the opposite lane to collide with a Royal Malaysia Police (PDRM) van carrying Johor Bharu Utara (JBU) personnel heading to Senawang,” he said in a statement here today.

He said the lorry driver was pronounced dead at the scene and a policeman sustained serious injuries on the leg while six other personnel as well as the driver and passengers of the Toyota Camry had light injuries,

He said the driver and the solitary passenger of the Perodua Alza were unhurt.

Hazri said the body of the lorry driver was sent to Rembau Hospital for post-mortem and the injured victims were sent to Alor Gajah Hospital and Melaka Hospital for treatment.

Philippines approves emergency use of Sinovac COVID-19 vaccine for children