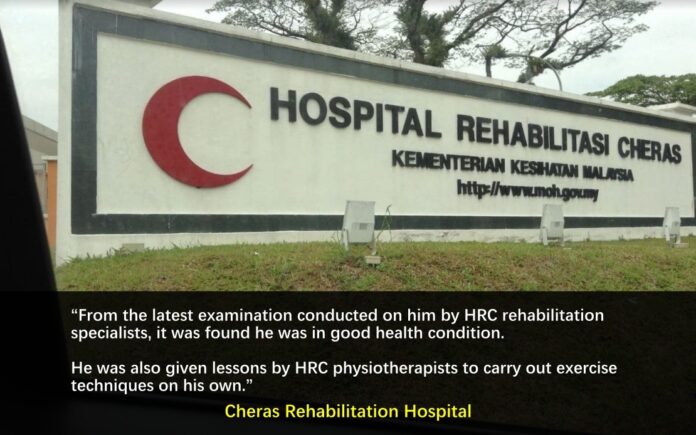 HRC in a statement said the consultant specialists from Kuala Lumpur Hospital and HRC have given the medical release and allowed him to be sent to prison again.

According to HRC, since his admission to the hospital, on Monday, the Pekan MP had undergone several examinations and rehabilitation treatments.

“From the latest examination conducted on him by HRC rehabilitation specialists, it was found he was in good health condition.

“He was also given lessons by HRC physiotherapists to carry out exercise techniques on his own,” according to HRC.

According to HRC, the consultant specialists also held a family conference with Najib and his close family members and they were informed of the latest situation as well as health monitoring plan for the former prime minister.

“In line with HRC’s goals, we will continue to be committed and transparent in the provision of services to ensure that patients treated here can reach their optimal level of potential and enable an individual to reach their maximum level of functionality,” according to the statement.

Najib was sent to Kajang Prison on August 23 after the Federal Court upheld a 12-year prison sentence and a RM210 million fine against him for misappropriating SRC International Sdn Bhd’s funds amounting to RM42 million.

On Sept 12, the Prisons Department informed the Kuala Lumpur High Court that it had ordered Najib be taken to hospital for a medical examination after being informed that his health condition was unsatisfactory.