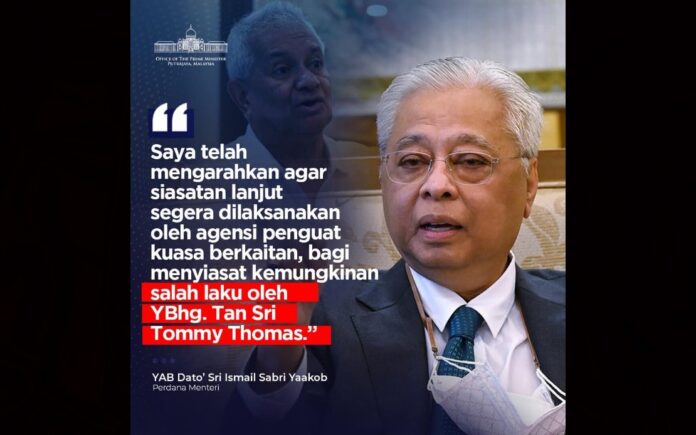 KUALA LUMPUR, Sept 30 — Prime Minister Datuk Seri Ismail Sabri Yaakob has ordered law enforcement agencies to immediately carry out further investigation into the possible misconduct by Tan Sri Tommy Thomas in relation to the allegations made by the former attorney-general in his memoir.

He said the investigation would be conducted, among others, under Section 124(I) of the Penal Code – spreading false reports; Section 4 of the Sedition Act 1948; Section 8 of the Official Secrets Act 1972; and Section 23 of the Malaysian Anti-Corruption Commission Act 2009.

Ismail Sabri said the special task force to investigate the allegations contained in the book titled ‘My Story: Justice in the Wilderness’ had presented a report to the Cabinet meeting today and had submitted several recommendations for the government’s consideration to decide on the next course of action.

“The report has been prepared by this team over a period of nine months, starting from December 2021 until August 2022, detailing each of the allegations mentioned by Tan Sri Tommy Thomas in his book,” he said in a statement today.

Based on the investigation, he said the team had categorised the 19 important issues detected in the book into four main issues, namely allegations against the Judiciary, disclosure of government information and secrets, illegal actions, abuse of power and professional negligence as well as seditious statements.

More than 1,000 jobs up for grabs at Labuan’s Jaminkerja Carnival

Najib-Anwar debate: K-KOMM not approached for use of gov’t media platform...