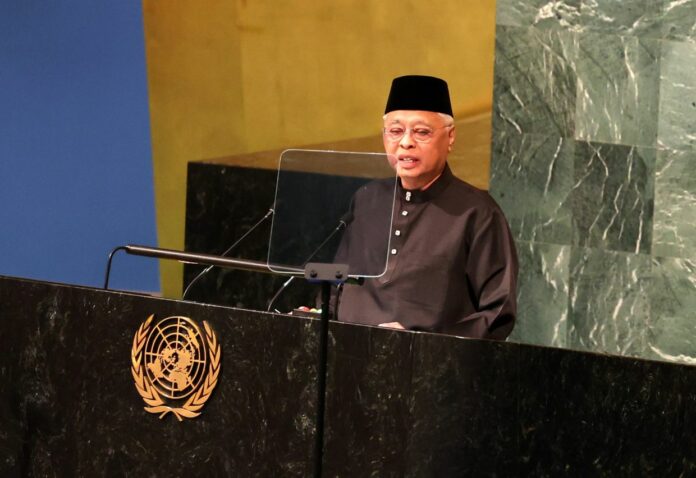 KUALA LUMPUR, Oct 1 — Leaders in the country should work together and support Prime Minister Datuk Seri Ismail Sabri Yaakob’s effort in empowering and elevating the national language at the international level.

National Book Development Foundation (YPBN) chairman Prof Tan Sri Abdul Latiff Abu Bakar said Ismail Sabri had started the move and it should be followed up by other leaders in the country.

“I hope other leaders will follow his (Ismail Sabri) footsteps … as Malaysians, we must be united to dignify our national language

“As one who is always promoting the Malay language and culture, I see him (Ismail Sabri) as an example of a leader whose actions speak louder than words. This is one good example that illustrates Malaysia’s identity, strength and character,” he said when contacted by Bernama.

According to Abdul Latiff, the charisma shown by Ismail Sabri at the 77th United Nations General Assembly (UNGA) last Sept 24 reflects his commitment ln appreciating and dignifying the Malay language to the world when carrying out his duties as the head of government.

Meanwhile, Principal Fellow at the Institute of Ethnic Studies (KITA), Universiti Kebangsaan Malaysia (UKM) Prof Datuk Dr. Teo Kok Seong said the issue that the country’s policy and stand failed to be conveyed to the international level just because of the use of the Malay language did not arise.

“This (usage of the National Language) is not something that is awkward. When other countries like China, Korea and Japan use their own language at international events, nobody commented, but when we use our own language, we have our own people making comments, like the message was not conveyed and so on.

“This is not true because there are professional translators who are trained and have the qualifications to translate during delivery…they can translate the content of the speech along with the tone of the speech, meaning that if the Prime Minister’s speech is fast then the English translation is also fast and if the speech is loud the translator will also loudly voice the matter,” he said.

Teo also voiced his concern about the attitude of some Malaysians who criticised government policies on the use of the Malay language, saying that it gave the impression that the country had failed in several aspects to form a nation-state to an extent of producing anti-national groups.

“In this regard, we failed in some aspects of nation-state building, we failed in the process of building Malaysians, whereas in Indonesia and some other countries it is not like that.

“In Malaysia, the Malaysians themselves do not support the country’s policy. For example on expanding the Malay language beyond our borders. It is contained in our foreign policy which is cultural diplomacy. The policy is there, but the people are against it,” he said.

Thus, Teo said the government should look again at the education system to examine where it went wrong which resulted in the rise of anti-national groups

“Is our education system wrong or is our way of building the Malaysian people is wrong that we failed to achieve the desired goals? We also always hear people saying that Malaysians only memorise the Rukun Negara but they failed to embrace it, where is the mistake,” he asked.

“The Prime Minister’s 22-minute speech showed the world that Malaysia exists as a sovereign, independent country with its own identity, which is through its language,” he said when appearing as a guest on Bernama TV’s ‘Malaysia Petang Ini’  talk show.

On Sept 24, Ismail Sabri made history as the first Malaysian leader to speak fully in the Malay language at the biggest diplomatic gathering.

People not receptive to having too many political parties – Ahmad...