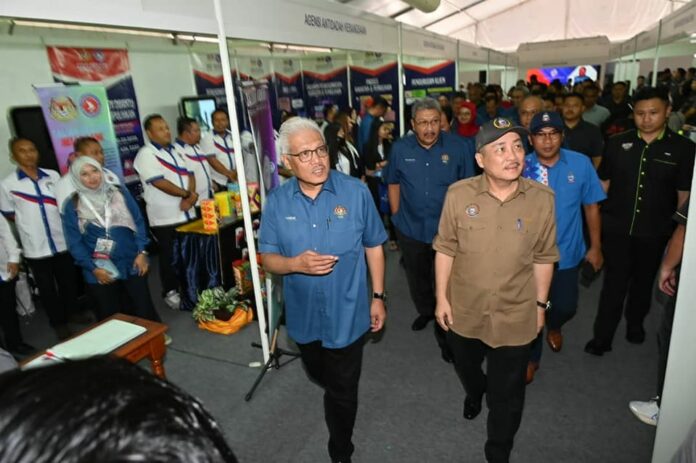 KOTA KINABALU, Oct 2 — Some RM7.4 million has been approved through the Second Rolling Plan of the 12th Malaysia Plan (12MP) to implement eight repair and upgrade projects of agencies under the Home Ministry in Sabah, said Home Minister Datuk Seri Hamzah Zainudin.

He said the project involved repairs and replacement of elevators of the Royal Malaysia Police (PDRM) complex, repair work at the Sabah police contingent headquarters, PDRM offices and housing, facility repairs as well as upgrade and maintenance of detention centres.

Others include upgrading works of the State RELA training centre, generator set at the Henry Gurney School in Keningau and the Tawau maritime jetty as well slope remedial works at Tongod police station.

“Under the 2nd Rolling Plan, there are also several new projects identified to be implemented in Sabah,” he said when closing the Sabah zone ‘Kita Demi Negara’ programme here today.

He said in order to strengthen border control in Sabah, the Home Ministry (KDN) has implemented several initiatives, especially in increasing the number of PGA control posts in the interiors of Sabah and Sarawak.

“This year, a PGA control post is under construction in Pagalungan, Nabawan. This will enhance security control and the omnipresence of security personnel in the border area.

Meanwhile, Hamzah said in order to expand its services to the rural areas, KDN has enabled PGA control posts to also function as police stations.

“There are nine GOF’s in Sabah that have been expanded to function as police stations, including two posts in Semporna, two in Beluran, and one each in Tawau, Kota Belud, Kudat, Kinabatangan and Kota Marudu,” he added.

He said the initiative was also an excellent example of strategic cooperation between departments under the ministry.

Malaysia to invest significantly in latest generation telecommunications and other technologies