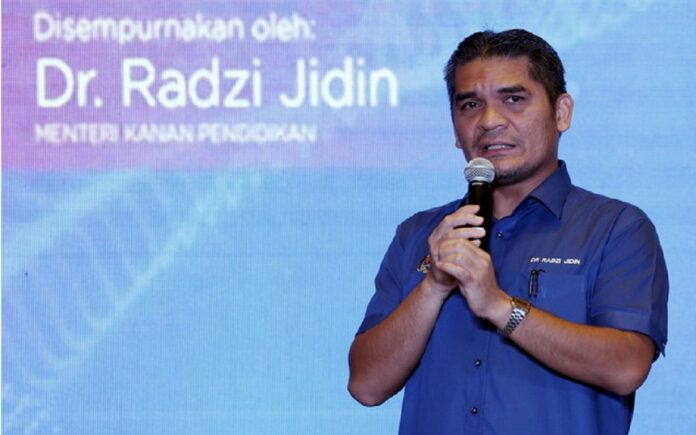 He said that developing a new syllabus also requires in-depth study involving many experts and experienced and capable teachers.

“This is not Radzi Jidin’s syllabus. I want to explain that the syllabus being used today began in 2017, and the process of developing it started long before that.

“If we change the syllabus frequently, teachers and pupils will face difficulties adapting to the new one. So what we have been practising is that once a cycle is completed, a review will be made to see the effectiveness of the syllabus,” he told reporters after launching the Reading Progress Initiative here today.

Elaborating, he said pupils entering Year One would use the same syllabus until they completed Year Six.

He said this in response to concerns raised by a teacher, Mohd Fadli Mohamed Salleh, on social media that the primary school mathematics syllabus is too advanced and unsuitable for the age group.

Meanwhile, Radzi said the ministry has never stopped teachers from voicing their views over the education system, adding that he himself went down to meet them to solve an issue, including heavy schoolbags among pupils.

“We have made various transformations at the ministry due to discussions and feedback from teachers and stakeholders. And I think it is not right to say that we don’t listen to views from teachers,” he said.

Regarding allegations of embezzlement in the MOE, Radzi said the ministry’s Secretary-General Datuk Yusran Shah Mohd Yusof had followed his directive to lodge a report with the Malaysian Anti-Corruption Commission (MACC).

“We are open, and we have nothing to worry about. That is why the secretary-general has taken action as instructed because we want to maintain the good image of the ministry. Our message is simple, every sen of people’s money must be returned to the people.

“I’m here serving the country. I have no other agenda. (So) if there is an allegation, the MACC can investigate,” he said.

PGM for employers with less than five workers postponed to July...