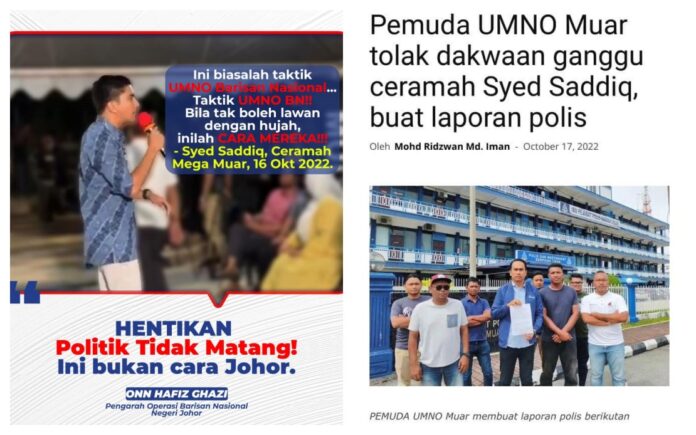 Johor BN operations director for the 15th General Election Datuk Onn Hafiz Ghazi said Syed Saddiq, without providing proof and witnesses, had accused UMNO and BN of causing a commotion at the talk.

“I carefully observed what Syed Saddiq said in a video clip that went viral yesterday.

“As the Johor BN operations director for the 15th General Election, I strongly deny Syed Saddiq’s extreme accusations, as if to paint a bad image to UMNO and BN,” he said in a post on his official Facebook today.

The Johor Menteri Besar said Syed Saddiq is urged to apologise and take responsibility for the accusations and provocation aimed at inciting people’s feelings of hatred towards UMNO and BN.

“Stop immature politics! I urge him to publicly apologise to UMNO and BN as soon as possible,” he said.

On Sunday, about 30 unknown individuals gathered at the Ceramah Mega Muar organised by MUDA and caused a commotion when Syed Saddiq was delivering a speech.

This group allegedly shouted “penipu” (liar) repeatedly when Syed Saddiq spoke about the aid he had previously channeled to the community.

Pardon for Najib not up to govt, UMNO – Ismail Sabri

List of queue jumpers will be sent to Khairy, says doctor