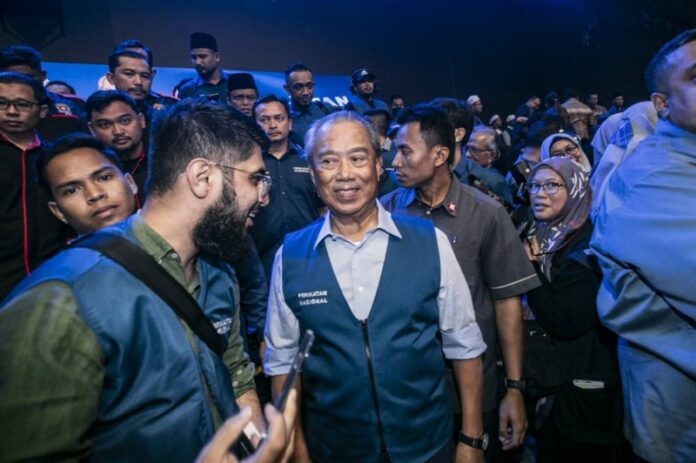 PN chairman Tan Sri Muhyiddin Yassin said that of the 169 parliamentary seats to be contested, Bersatu will vie for 74 seats, PAS (64), Gerakan (20) and affiliated groups (11).

“This was decided at the PN Supreme Council meeting and we will announce the candidates contesting, except for Kelantan and Terengganu, at another date, either tomorrow or the day after,” he said.

Muhyiddin said this at the ceremony to announce PN’s candidates for GE15 at the Malaysia International Trade and Exhibition Centre (MITEC) here tonight.

On Oct 20, the Election Commission (EC) set Nov 19 as the polling day for GE15, while the nomination day was set for Nov 5 and early voting on Nov 15.

At the ceremony to announce PN’s candidates, Muhyiddin said he would defend the Pagoh parliamentary seat.

He also announced the lineup of several key leaders who will be contesting, with Bersatu deputy president Datuk Seri Ahmad Faizal Azumu vying for the Tambun parliamentary seat while Bersatu secretary-general Datuk Seri Hamzah Zainudin will defend his seat in Larut.

PN Wanita chief, Datuk Seri Rina Mohd Harun, who is also Bersatu Wanita chief, meanwhile will switch from the Titiwangsa parliamentary seat to Sepang in the election this time.

“This is the first time we (PN) are contesting the general election, so we are featuring those who are qualfied, people-friendly and caring towards the issues faced by the people so that they can shoulder the trust in managing the fate of the people after GE15,” he said, adding that PN’s candidate negotiations went smoothly.

He, however, reminded all coalition members to accept the leaders’ decision regarding the names of candidates that had been announced and sought the cooperation of members at every level of the party to continue to ensure victory for PN in GE15.

Touching on the PN manifesto, Muhyiddin said the coalition will launch it on Sunday (Nov 6).

At the event, all the candidates and PN committee members, led by Muhyiddin, took an oath and signed the Akujanji (pledge of good conduct) agreement expressing their commitment to build a government that is free from corruption, misappropriation and abuse of power if given the mandate by the people in GE15.

A Datuk Seri among 25 arrested at wild party in Janda...