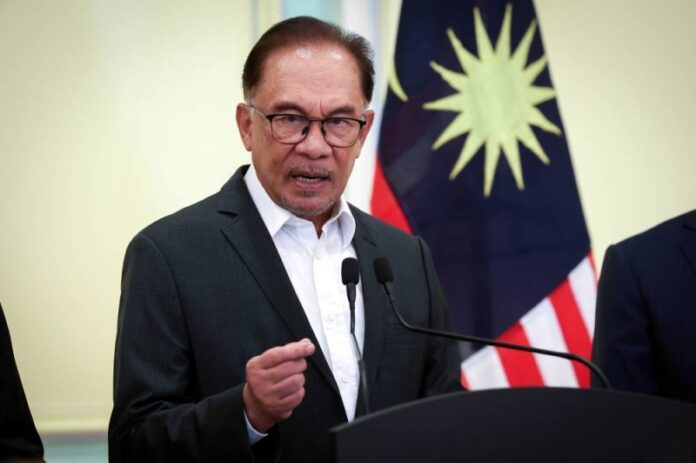 He said this decision reflected the Cabinet members’ concern for the problems faced by the people now.

Anwar said the salary cut would remain in effect until the country’s economy had recovered.

“If the economy recovers in three years’ time, we will review … this salary cut is appropriate, but I would like to thank them (ministers) for their willingness to make a bit of sacrifice.

“Some people say Anwar is willing to forgo the Prime Minister’s salary because he is getting the Finance Minister’s pay. That is not correct … there is only one salary,” he said in a press conference after chairing the first special Cabinet meeting of the Unity Government here today.

On criticism by certain quarters on his Cabinet line-up, Anwar said he believes and trusts that his Cabinet team is determined to ensure they follow strict rules and the principle of good governance.

“We are determined; I made it very clear and the ministers are very clear. On the issue of good governance and anti-corruption drive, there is no compromise,” he said.

He said it was interesting that those who had been harping on the kleptocracy issue were themselves very much compromised in big dealings which benefited their sons, children and in-laws.

“I must remind them that if you really want to get to the bottom of it, you must be prepared to be truly transparent and be truly investigated. Investigations cannot be selective and that is our position,” said Anwar, who is also the Finance Minister.

Anwar said good policies which were implemented by the previous government would be continued by the Unity Government.

“Good agreements, contracts, no problem, we will follow … this government will continue with the existing system. It’s just that we will be firmer in making changes.

“If it is clear that tenders worth tens of billions did not follow procurement (procedure) or if projects costing tens or hundreds of billions were approved without following process, we definitely have to review. This is not my money; it is the people’s money,” he said.

On bills which were already tabled but could not be passed before Parliament was dissolved, Anwar said they would be reviewed by Minister of Law and Institutional Reform Datuk Seri Azalina Othman Said. The deferred bills include the Control of Tobacco Product and Smoking Bill 2022.

“She would bring the matter to the Cabinet and a decision would have to be made by the ministers. But if the proposed laws are good, including from the Barisan Nasional or Perikatan Nasional government, we will continue,” he said.

Anwar said he also explained to the Cabinet the chronology of events on the formation of the new government to refute allegations and to clarify the facts.

“I think it is time to accept the fact and stop disputing the power, authority and wisdom of the Yang di-Pertuan Agong. However, this does not prevent other efforts which are in line with parliamentary practice and democracy to reject and the like. But it is not appropriate to dispute its legitimacy,” he added.

On the appointment of Ahmad Zahid, Anwar said people have the right to question but his appointment was made based on various factors.

“He has been charged but not convicted yet, and we have to respect the process. Incidentally, he is the UMNO president and Barisan Nasional chairman and in this unity government I need to consider all these factors.

“I simply find it hard to understand. Those harping on the issue of corruption must be clean. They should not speak out against corruption but then take projects worth hundreds of millions,” he said.

Multi-lane free flow by 2025 to reduce congestion at toll plazas...