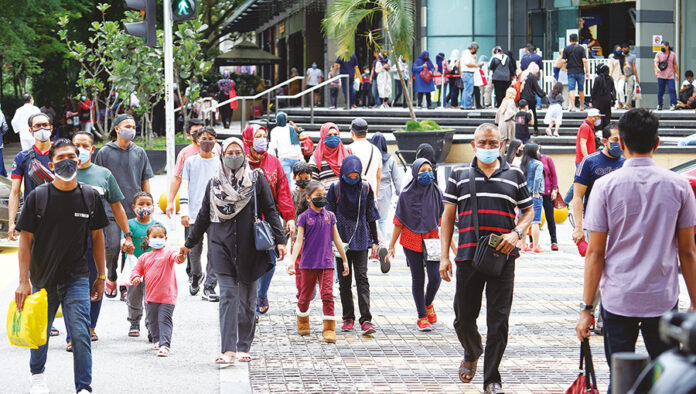 PUTRAJAYA, Dec 6 — The total Bumiputera population this year is estimated at 21.13 million persons with a growth rate of 1.1 per cent as compared to 20.9 million persons last year, according to the Department of Statistics Malaysia (DOSM).

In a statement today, DOSM said that the male population outnumbered the female with 10.69 million and 10.44 million while the gender ratio for the overall population was 102 males for every 100 females.

“In terms of demographic statistics, the number of live births for Bumiputera in 2021 was 357,140 with the life expectancy at birth being 70.5 years for males and 74.7 years for females. Meanwhile, the total fertility rate for a Bumiputera female decreased to 2.1 in 2021 from 2.2 in 2020,” the department said.

The Bumiputera Statistics 2022 was issued for the first time today, which also displays selected Bumiputera statistics in the social and economic area at the national and state levels from 2017 to 2022.

On the labour force, a total of 9.26 million labour force in 2021 were Bumiputera which comprised 5.58 million males and 3.68 million females.

On the other hand, according to the department, the unemployment rate among Bumiputera was 5 per cent in 2021 as compared to 4.5 per cent, in the previous year.

In terms of graduate statistics, DOSM said the number of Bumiputera graduates registered in 2021 was 3.63 million persons with 1.63 million of them being males and 2 million females.

Meanwhile, it said the number of Bumiputera registered at the General Welfare Institution under the Social Welfare Department in 2021 increased to 3,228 persons from 2,948 persons recorded in the previous year.

Malayan tigers not a threat to humans if not Threatened –...