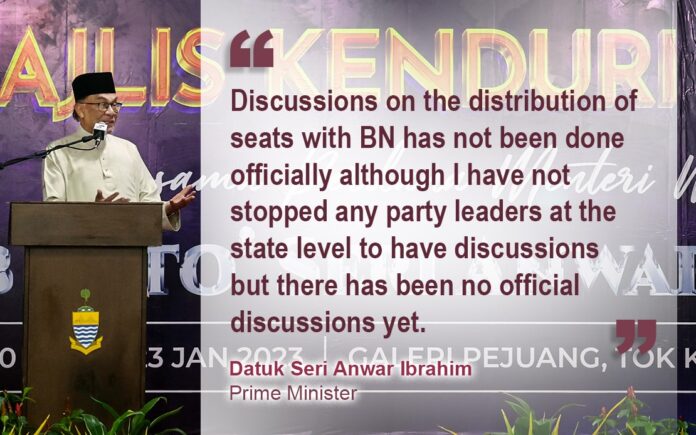 BUKIT MERTAJAM, Jan 23 — Prime Minister Datuk Seri Anwar Ibrahim said Pakatan Harapan (PH) has yet to officially hold talks with Barisan Nasional (BN) on the distribution of seats to be contested by both parties during the six state elections.

However, Anwar who is also the PH chairman said there are no restrictions for party leaders in the state to hold talks and discussions with BN state leaders with regard to the matter.

“Discussions on the distribution of seats with BN has not been done officially although I have not stopped any party leaders at the state level to have discussions but there has been no official discussions yet,” he told reporters after attending a ‘Kenduri rakyat bersama Perdana Menteri’ in Cherok Tok Kun, here tonight.

The Prime Minister was asked if PH and BN had discussed the distribution of seats for the state elections in six states, namely Kedah, Penang, Selangor, Negeri Sembilan, Terengganu and Kelantan.

On Saturday, PKR deputy president Rafizi Ramli was reported as saying that PH had started discussions with BN on the collaboration between both parties for the coming state elections unofficially.

The state elections will be held in Selangor, Penang, Negeri Sembilan, Kedah, Kelantan and Terengganu.

Meanwhile, Anwar said he would not interfere in the affairs of PAS since the party had declared that the it would decide the date for the dissolution of the state assembly of three states under its ‘rule’, namely Kedah, Terengganu and Kelantan.

“It is their (PAS) prerogative and they can deal with the Election Commission, it is not my business, just that when the state elections are not simulteneously held, the cost will increase.

PAS president Tan Sri Abdul Hadi Awang was reported as saying PAS would decide on a suitable date to dissolve the state assemblies of Kedah, Terengganu and Kelantan.

Cost-of-living solutions expected to be implemented January next year