PUTRAJAYA, May 27  — Members of the public who wish to fly a drone during the Conditional Movement Control Order (CMCO) period must first apply and obtain a permit from the Civil Aviation Authority of Malaysia (CAAM).

Senior Minister (Security Cluster) Datuk Seri Ismail Sabri Yaakob said this was because the permit will only be issued by the CAAM and not the National Security Council (MKN), Special Committee or even the Special Ministerial Committee.

“So, they (the public) must obtain the approval (permit from the CAAM), apart from the Royal Malaysia Police (PDRM), to fly a drone.

“If the two authorities (CAAM and PDRM) approved, then there should be no problem for the public to fly their drones,” he told the daily press conference on the CMCO here today.

Prior to this, it was reported that all quarters, including the media, have been prohibited from flying drones at any location across in the country while the movement control order (MCO) is being enforced until May 12.

When asked about illegal immigrants squatting together outside construction sites, Ismail Sabri said it is up to the Immigration Department to take the necessary action.

“It is illegal for them (illegal immigrants) to work in our country…the issue will be tackled in a similar manner (with that outside the MCO period) because they entered our country illegally.

“Operations will only be mounted on illegal immigrants and not those who have valid travel documents and permits,” he said.

The minister said for those who entered the country legally, the government still has a standard operating procedure (SOP) for them, regardless of them living inside or outside construction sites.

Meanwhile, Ismail Sabri said the government is prepared to face the possible increase of COVID-19 cases in other immigration detention depots after the recent increase of cases reported in the depots in Sepang, Bukit Jalil and Semenyih. 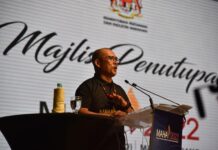 MAEPS will be kept open year-round as agro-tourism attraction

New EPF member registration rises to 146,000 in first quarter of...