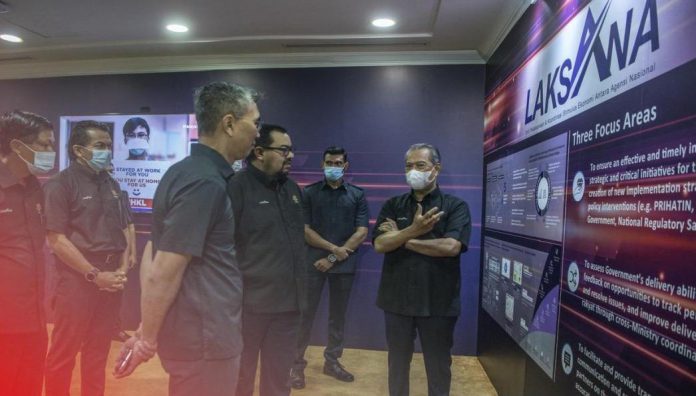 PUTRAJAYA, June 16 — Prime Minister Tan Sri Muhyiddin Yassin today launched a digital dashboard that is capable of linking data from 53 ministries and agencies that are involved in the implementation of the planned stimulus packages worth RM295 billion.

The launch was held in conjunction with Muhyiddin’s official working visit to the Economic Stimulus Implementation and Coordination Unit Between National Agencies (LAKSANA), which is also the developer of the digital dashboard, at the Finance Ministry here.

The Prime Minister’s Office (PMO) said this approach would enable the government to act in a dynamic way and quickly based on big data in making decisions to ensure the effectiveness in delivering assistance and services.

According to the PMO, the centralised and live data collection displayed through the digital dashboard was the outcome of the cooperation among the ministries and agencies, in line with the government’s efforts toward e-implementation, in preparation for the Fourth Industrial Revolution as well as the shift to face the new normal.

The Prime Minister’s visit to LAKSANA was to observe the operations as well as the status of implementation of PRE2020; PRIHATIN and PENJANA which are worth a total of RM295 billion.

The Prime Minister was also briefed on efforts undertaken by LAKSANA, including the weekly progress report on achievements made under the PRIHATIN and PENJANA packages by the Finance Minister.

LAKSANA’s effort in strengthening the cooperation between the public and private sectors also represents an important keystone in making the country’s economic recovery plan a success.