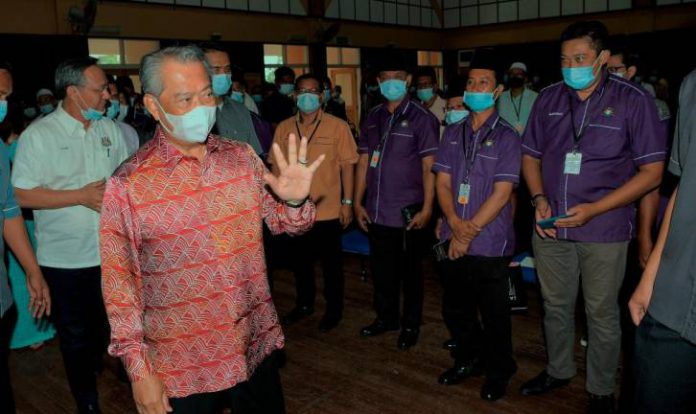 TANGKAK, June 27 — Tan Sri Muhyiddin Yassin said he did not want to touch on political issues for the time being.

Instead, the Prime Minister said he wanted to focus on his priorities, namely, the welfare of the people and efforts to revitalise the country’s economy which was impacted following the COVID-19 pandemic.

Muhyiddin said this when speaking at a gathering with community leaders in the Gambir State Assembly (DUN) constituency at the Bukit Gambir Multi-purpose Hall this morning.

Muhyiddin, who is also the Parti Pribumi Bersatu Malaysia’s acting chairman and president, stressed that the country’s economic recovery was dependent on the returns of traders and economic sector players as well as the support of the Federal Government and related government agencies.

“To fight there, to rebut here, (I) can do it, but (my) main concern is none other than the welfare of the people, the development of the country, the revitalising the economy, looking after the health of the people of our country, and such measures, I think, are developments that the people are waiting for, not a story embroiled in politics,” said Muhyiddin, who is also the Pagoh Member of Parliament.

Muhyiddin said the challenge to revitalise the country’s economy was just as important as checking the spread of COVID-19.

This is the first time the Prime Minister had returned to his constituencies since the Movement Control Order (MCO) came into force on March 18 and after a relaxation of inter-state travel was allowed on June 10.

Tiong’s statement on Pelosi’s visit to Taiwan not in line with...