“We disagree with the decision from the Commerce Department, and are disappointed that it stands to block new app downloads from Sunday and ban the use of the TikTok app in the US from Nov 12,” a TikTok representative said in a statement acquired by Xinhua news agency.

“Our community of 100 million US users love TikTok because it’s a home for entertainment, self-expression, and connection,” the Los Angeles-based tech company said, “and we’re committed to protecting their privacy and safety as we continue working to bring joy to families and meaningful careers to those who create on our platform.”

The Commerce Department said Friday that as of Sunday, any moves to distribute or maintain TikTok on app stores such as Apple Store and Google Play will be prohibited, and a more extensive ban against the app would be applied from Nov 12.

Business insiders said that, under Friday’s decision, TikTok’s users who had already downloaded the app may continue using it, but they will not be able to download updated versions from Sunday.

According to the company, as of June, the total number of TikTok’s monthly active users in the country soared to 91,937,040, and based on quarterly usage, 100 million Americans used the app.

Meanwhile, the White House was reported weighing a proposal raised by TikTok on Monday, which the company believes “would resolve the Administration’s security concerns.”

Oracle, an American multinational computer technology corporation headquartered in California, confirmed in a statement on Monday that it reached a deal with TikTok’s Chinese parent, ByteDance, to be the latter’s US trusted partner.

So far, no details about the proposal have been exposed.

US President Donald Trump and some US politicians have repeatedly expressed speculation that TikTok poses a national security threat to the country, though no evidence has been provided to support the allegations. 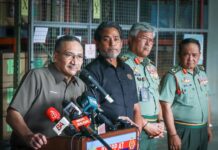 Mobilisation of LCS project expected to be completed by year-end