KUALA TERENGGANU, Sept 19 — Breeders, middlemen and members of the general public are reminded not to move livestock from areas infected with Haemorrhagic Septicaemia (HS) to other districts without the permission of the Terengganu Veterinary Services Department (JPV).

Terengganu Agriculture, Agro-based Industry and Rural Development Committee chairman Dr Azman Ibrahim said this was considered a serious offence as it could cause the bacterial infection to spread to a wider area.

“This strict ban must be taken note by all parties for the common good. The affected districts are Marang and Kuala Terengganu. The transfer of livestock from other districts that are not involved also must get prior permission from JPV,” he said in a statement on his Facebook page.

Meanwhile, he said an enforcement team from the Terengganu JPV stopped a lorry believed to be transporting two buffaloes from the Manir area here, to another district without permission.

Recently, the family of Muhammad Syukur Khamis, 15, who is popularly known as ‘Mowgli Malaysia’ or ‘Kampung Boy’ was hit by a disaster when more than 50 of their buffaloes died in stages since Sept 9, believed to be due to HS. 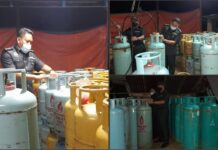