PETALING JAYA，Jan 29: Two opposition MPs have hit out at Ismail Sabri Yaakob after the senior minister labelled them as advocates for foreigners after they had criticised a ruling that gives managers of condominium or apartment buildings the power to bar residents unless they undergo Covid-19 testing.

PKR’s Fahmi Fadzil said Ismail did not address the issue that he raised, while DAP’s Hannah Yeoh said the minister had “no class”.

Yesterday, Fahmi called for the policy to be reviewed, pointing out that B40 could not afford such tests.

The Lembah Pantai MP also said the policy could only be incorporated into by-laws through an emergency general meeting which could not be held now as most of the country was under the movement control order.

Yeoh, meanwhile asked when Ismail would use science to govern the country, stating that Covid-19 did not discriminate between Malaysians or foreigners as well as tenants and landlords.

Ismail shot back stressing that there was no directive or policy by the National Security Council to make it compulsory for tenants or visitors, be they foreigners or Malaysians, to take a swab test before entering an apartment or condominium.

However he said it was the right of the management of such premises to impose such a requirement on foreign tenants.

Ismail went on to accuse Fahmi and Hannah of being advocates for foreigners.

“For them, the cost borne by foreigners for Covid-19 test is of more value than the lives of Malaysians.

“Maybe there are elected representatives for foreigners and not Malaysians.”

To this, Fahmi said that his tweet yesterday had not even mentioned the issue of foreigners and that he only raised the cost of such tests, which went unanswered.

“The issue is about the joint management body and management corporation. That is the main issue.”

Yeoh, meanwhile, said that when the minister was taken to task by the people, he decided to accuse her and Fahmi of being advocates for the foreigners. 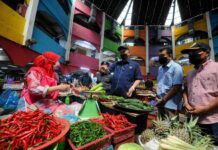