PUTRAJAYA, Feb 6 — Malaysia will discuss with Indonesia to formulate the best strategy to protect the oil palm industry of both countries in the near future, said Minister of Plantation Industries and Commodities Datuk Dr Mohd Khairuddin Aman Razali.

He said this was in line with Prime Minister Tan Sri Muhyiddin Yassin’s call for the framework of the Council of Palm Oil Producing Countries (CPOPC) to be strengthened to protect the common interests of member countries, particularly Malaysia and Indonesia.

“I will discuss with my Indonesian counterpart, the Coordinating Minister for Economic Affairs, Airlangga Hartarto, to formulate the best strategy to protect the oil palm industry of both countries in the near future,” he said in a statement here today.

CPOPC was established jointly by Malaysia and Indonesia on Nov 21, 2015 to champion issues related to the palm oil industry.

Mohd Khairuddin said Malaysia would continue to work with Indonesia to oppose discrimination on palm oil either in a two-way or multi-party relationship.

He said Indonesia and Malaysia, which are the largest and second-largest producer countries in the world, were also constantly seeking to reach an agreement in developing and maintaining the palm oil industry in both countries.

Mohd Khairuddin said the Ministry of Plantation Industries and Commodities welcomed the call by the Prime Minister during a meeting with Indonesian President Joko Widodo in Jakarta yesterday to further strengthen Malaysia’s cooperation with Indonesia to oppose discrimination on palm oil by European Union (EU) countries and several other countries.

He said the two leaders had expressed concern over the unfounded anti-palm oil campaign which did not reflect the sustainability of the palm oil industry and its preservation of environment. The campaign also contradicts the principles of free trade practices as outlined by the World Trade Organisation (WTO).

Following that, Muhyiddin said Malaysia had filed for legal action against the EU with the WTO on Jan 15, in line with the statement issued on the same day as soon as the filing was done, apart from a similar action taken by Indonesia on the EU in December 2019. 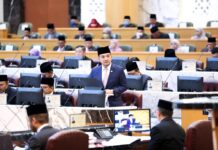 Chicken Price: Not ‘u-turn’ but based on people’s views – PM Ismail Sabri

Retail price of RON 97 remains at RM4.70 per litre