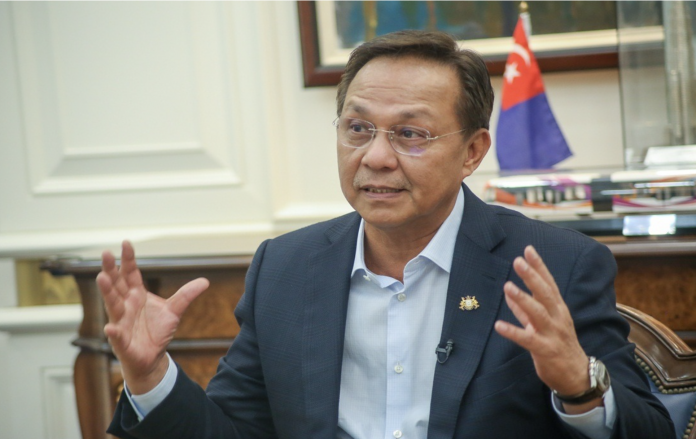 ISKANDAR PUTERI, June 3 — Johor’s intention to obtain an additional supply of vaccines for itself from other countries has been made known to Foreign Minister Datuk Seri Hishammuddin Tun Hussein, says Johor Menteri Besar Datuk Hasni Mohammad.

He said the state government had informed through the proposal that it was looking to purchase 500,000 doses of vaccine approved by the National Pharmaceutical Regulatory Division (NPRA) for 250,000 recipients.

Hasni said among the countries being considered for the procurement were Singapore and China, which had good relations with Johor, and he hoped this would pave the way for the state government to obtain the vaccines needed to speed up the vaccination process.

“If Malaysia’s quota (of getting the vaccines) is a little later, and Singapore can get a bigger quota (of vaccines), and with Johor and Singapore being close neighbours, I believe this allows Johor to look into the possibility of getting additional vaccines sooner.

“I have voiced out about this to (Datuk Seri) Hishammuddin and it is just a matter of how to start the negotiation. Because there are certain procedures I suppose that both countries have to agree or to follow,” he said in an exclusive interview in his office, here, recently.

He said the additional vaccines would be purchased using the state government’s allocation and he planned to work with KPJ Healthcare Bhd to handle the procurement process as well as the distribution of vaccines to those in need.

The Benut state assemblyman said with its own supply of vaccines from abroad, the state government was targeting to administer more than 20,000 injections per day for the people of Johor at 46 vaccination centres (PPV) throughout the state.

“We want to strive to vaccinate as many as possible. At least 80 per cent of Johor’s population will have to be vaccinated to achieve herd immunity against the virus by October this year,” he said.

When asked about measures to speed up the vaccination process for the elderly due to physical limitations and lack of transportation to PPVs, besides those living in rural areas, he said the 10 district officers and about 630 village heads should play their respective roles in this matter.

He believed that with the cooperation of various parties, the problem could be overcome, adding that he hoped the 500 volunteers working at PPVs would help identify and register the target groups for vaccination, as well as in terms of providing transportation.

When asked whether Johor would approach China to procure the additional vaccines in a similar manner, Hasni said Hishammuddin had indicated the matter would soon be discussed at the Federal level.

He said the intention was not only to procure vaccines from the country, but also to consider obtaining the facility to get people in Johor tested on a larger scale.

“If the Federal goverment can agree with Hishammuddin, he has offered Johor to be the first state to get that kind of facility,” said Hasni.

Touching on the ‘Johor Immu Plan’ – a state government initiative to help Malaysian workers who have a valid work permit in Singapore or have a job offer letter or an employer’s letter in Singapore to get the vaccine – Hasni said as of May 31, a total of 109,581 applications were received from Malaysians working in Singapore.

He said of the total, only 80 per cent of applications met the criteria.

“We know that although the federal government is still in discussions with the Singapore government to reopen the border, we hope more economic frontliners, including those working in the industrial and retail sectors in the republic, register for the Johor Immu Plan.

“This is because if there are a large number of applications and meet the criteria set for the provision of 100,000 doses of this vaccine, it will be a strong reason for Johor to negotiate with the Federal government to get more vaccines,” he said.

The registration for Johor Immu Plan began on April 29.

More restrictions eased for fully vaccinated in Phase One states, including...