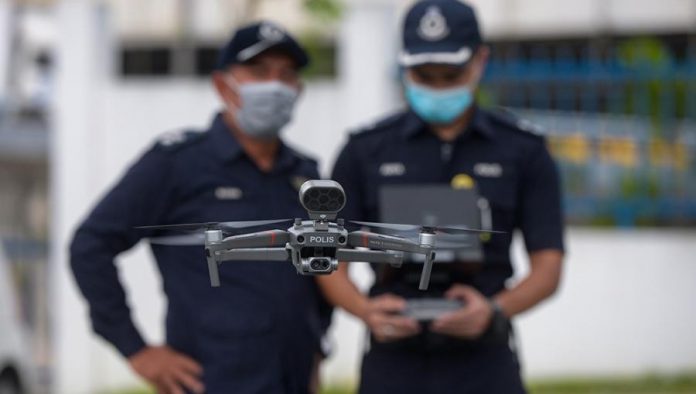 State police chief, Datuk Rohaimi Md Isa said the drones, equipped with temperature scanning technology, could detect body temperatures in a group of people at a range of 20 metres from above.

“If the drone detects an individual with a high body temperature, such as 37.5 degrees Celsius, it will emit a red light and our enforcement personnel will go to the location to identify the symptomatic individual.

“We have been using these drones for the past two or three days and they help our enforcement team immensely. Although we have 157 standard operating procedure (SOP) monitoring teams, they move from one location to another.

“This makes them unable to monitor every location at once, including detecting symptomatic individuals in public places,” he told reporters after visiting a roadblock at the Sultan Mahmud Bridge, here, today.

He said the drones, based in Kuala Terengganu, were loaned to the state by a private company for police use throughout the enforcement of the full lockdown.

In April last year, Terengganu police used drones to track the movements and temperatures of residents in Dungun during the Movement Control Order (MCO).

Meanwhile, Rohaimi said since the current total lockdown was enforced six days ago, 108 individuals were issued compounds of between RM1,500 and RM5,000 for SOP violations, with failure to wear a face masks and not practising physical distancing topping the list.

But with police enforcement, the rate of compliance with the total lockdown SOP among Terengganu residents was around 96 per cent, adding that it was a proud achievement.

On another development, Rohaimi said the rate of vehicle entry into the state through the East Coast Expressway 2 (LPT2) had dropped by 75 per cent and most vehicles that entered had authorisation letters, mostly related to essential services.

He said that since May 31 until yesterday (June 5), Terengganu police received 5,756 applications for inter-state and inter-district travel, but 216 of the applications were rejected due to various factors, including failure to submit supporting documents.