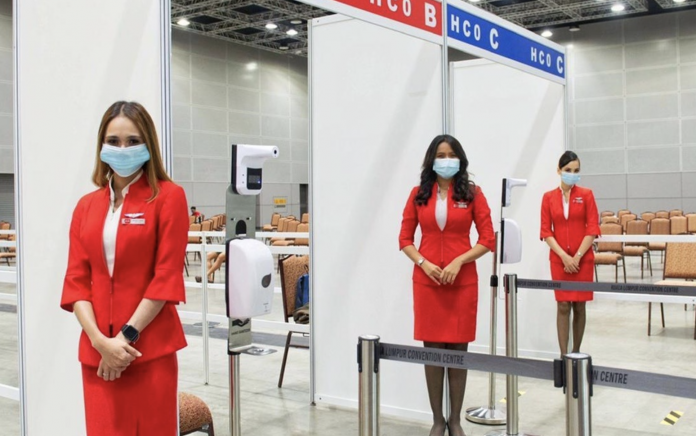 KUALA LUMPUR, June 11 — The presence of AirAsia Allstar employees brought an added touch of class to the vaccination centres at the Kuala Lumpur Convention Centre (KLCC) and Setia City Convention Centre (SCCC) with their signature poise and courteous service as they began their volunteer stint yesterday.

Those who came for their vaccination were greeted with warm smiles by the cabin crew, all dressed immaculately in their uniforms, as soon as they arrived at the main entrances.

They were accorded the same level of care and attention as passengers onboard an AirAsia flight as they made their way through the five stations of the centres to complete the vaccination process.

AirAsia Malaysia cabin crew chief Nurul Tiara Rosli, who was on duty at the KLCC vaccination centre, said the non-medical tasks they handle include ushering vaccine recipients, checking documents and MySejahtera status and providing briefings on any possible symptoms associated with vaccination.

Being a true professional, Nurul ensured that all tasks performed by the volunteers were in the same style and manner that have made air travel synonymous with luxury and class.

“There are some who even want to take a selfie together with us, and many seem delighted when they hear our announcements, which probably bring back fond memories of their travels in the past. So it’s not surprising many of them take our their mobile phones to record videos and take photos,” she told Bernama today.

Excited over the chance to put on her uniform once again, Nurul Tiara, a seven-year cabin crew veteran, said all of them were also briefed on the National COVID-19 Immunisation Programme process at every centre to ensure its smooth operation.

Aware that many miss the chance to travel again, she said this was the time for Malaysians to realise that vaccinations are really needed to achieve herd immunity to enable the country’s economic activities, including domestic and foreign travel, to recover.

Another AirAsia cabin crew, Mohd Suhairi Zakaria, related his satisfaction in being able to assist in activities at the centre, including helping the elderly in wheelchairs throughout the entire vaccination process.

Proud that he is able to contribute to the country’s vaccination programme, Mohd Suhairi said their extensive experience in communicating with passengers has made their work at the centre a breeze as it was similar to how vaccine recipients should be treated.

Many netizens took to social media sharing videos showing AirAsia cabin crew members making announcements, including TikTok user @WakMustarjo who posted: “Wow…you make those who are receiving their vaccine shots feel like they’re on vacation, at the airport,” while @username wrote: “If you get your vaccine shot here, you need to bring your luggage with your flight ticket.”

Over 300 AirAsia Allstars have chosen to volunteer at the two centres, comprising engineers, ground crew, office staff and management staff, who perform non-medical tasks, and their numbers are likely to be increased to 1,000 in the near future.

Projects may have to be stopped if development allocation is reduced...