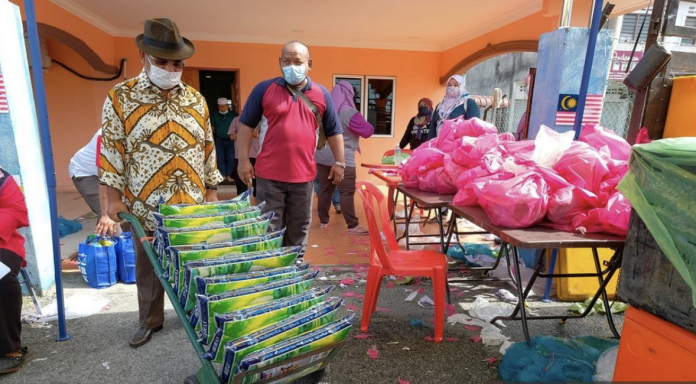 PASIR SALAK, June 13 — The drive-thru method is now among the options offered by volunteers here in distributing aid to the needy including asnaf (those eligible to receive zakat or tithe) whose livelihoods adversely affected by the Movement Control Order (MCO) 3.0.

Pasir Salak MP Datuk Seri Tajuddin Abdul Rahman said the concept facilitated the distribution of aid without having to gather in large numbers and at the same time comply with standard operating procedures (SOPs) set by the National Security Council (MKN).

“Bantuan Prihatin Rakyat (BPR) is for the affected groups such as asnaf who have been identified in the Sungai Manik state constituency and surrounding areas.

“Appointed heads, such as from the UMNO’s Wanita and youth wings, will come over to the parliamentary service centre here to take food aid without having to leave their vehicles and then return to their respective areas for distribution,” he told the media today.

He said that the drive-thru concept, among others, helped reduce congestion and the risk of the spread of the COVID-19 pandemic and it should be expanded to facilitate helping those in need when the pandemic struck.

In another development, Tajuddin, a former chairman of Prasarana Malaysia Berhad (Prasarana) was planning to take legal action against those who have tarnished his reputation following a collision involving two Light Rail Transit (LRT) trains on May 24.

“I was humiliated. This is not fair. I deny all allegations and will take legal action against certain parties,” he stressed.

In the 8.45 pm incident, a total of 47 passengers were reported to be seriously injured while 166 escaped with minor injuries, when a train carrying passengers and an out-of-service train that was being test driven, collided.

Following the incident, the Ministry of Transport set up a special panel of investigators, to investigate the cause of the incident and two days after the incident, Tajuddin was terminated as chairman of Prasarana with immediate effect.