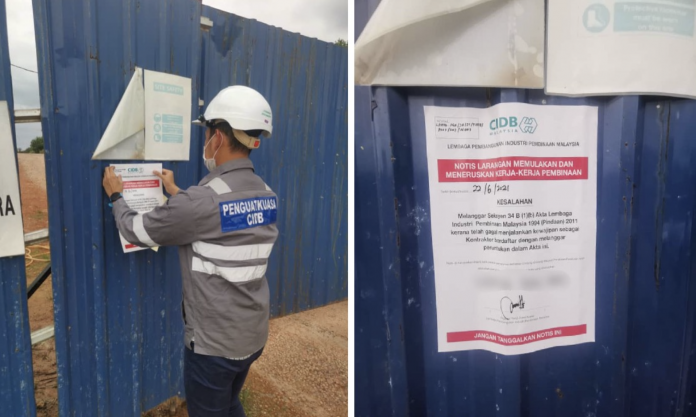 KUALA LUMPUR, June 23  — Two construction sites in Sabah have been ordered to close while the operation approvals for two sites in Johor have been revoked after the contractors failed to comply with the Movement Control Order (MCO) standard operating procedure (SOP).

The Construction Industry Development Board (CIDB), in a statement today, said the actions were taken following an MCO 3.0 enforcement operation conducted by the agency’s branches in Sabah and Johor today.

According to CIDB, the two sites in Sabah were found to have failed to adhere to the National Security Council (MKN) SOP checklist while six of the eight sites visited were not in operation.

“Both sites in Beaufort and Kinabatangan were ordered to cease operation immediately and served with the Stop Work Notice N3E/2021 and Failure to Comply with Construction Work SOP during MCO Notice N3B/2015,” the statement said.

The offences committed included failing to declare the project to CIDB, operating without the International Trade and Industry Ministry’s (MITI) approval, using an expired registration certificate and carrying out works that were not critical.

“Besides that, the workers quarters provided did not receive approval by the Labour Department or local authorities and failed to comply with the SOP stipulated by the Health Ministry,” according to CIDB.

In the operation in Johor Bahru, two of 16 sites inspected were found to be in breach of SOP and seven sites were not in operation.

Closure notices were issued to the main contractors of both sites and their MITI approvals were revoked for failing to fully adhere to MCO operation conditions and not getting approval from the Labour Department and local authorities for their workers quarters, it said.

CIDB reminded construction industry players to adhere to the SOP, the list for which can be downloaded at www.cidb.gov.my

Private hospitals will be allowed to initiate discussions for COVID-19 vaccine...