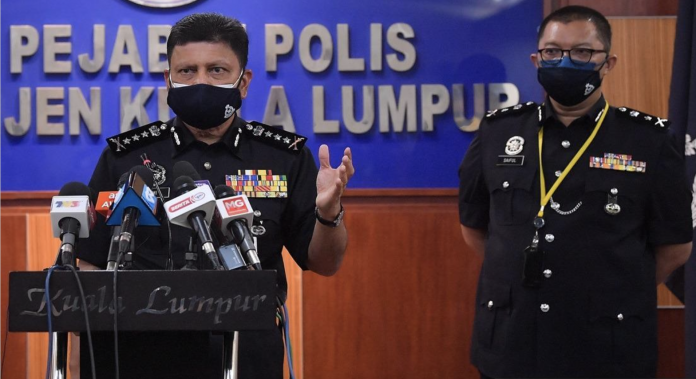 KUALA LUMPUR, Aug 2 — Police will call the Members of Parliament (MPs) and those involved in the gathering at Dataran Merdeka today to give their statements on the event.

Kuala Lumpur Police chief Datuk Azmi Abu Kassim said all of them were being identified and the case is being investigated under Section 9 of the Peaceful Assembly Act 2012, Section 269 of the Penal Code and the Prevention and Control of Infectious Diseases Act 1988 (Act 342).

“So far, police have received two reports on the event,” he told a press conference at the Kuala Lumpur Police Contingent headquarters here today.

Earlier today, police had stopped and dispersed peacefully the MPs who gathered at Dataran Merdeka and marched to Parliament in their attempt to urge for the special sitting of the Dewan Rakyat to be resumed after it was adjourned on the advice of the Ministry of Health following the spread of COVID-19.

Despite the peaceful dispersal of the gathering, the police, however, had noticed many violations of the standard operating procedures (SOP), especially in terms of physical distancing, committed by the MPs and the participants.

Azmi said the police were alerted yesterday that a solidarity gathering with Opposition Leader Datuk Seri Anwar Ibrahim would be held at Parliament.

“We (police) then checked with Parliament staff who said that there would be no Dewan Rakyat sitting today.

“So, we decided to conduct roadblocks at all roads heading to Parliament for security purposes,” he said, adding that approximately 500 police personnel, including from the Federal Reserve Unit (FRU) were mobilised to control the situation during the march.

Yesterday, the MOH recommended for all meeting sessions in Parliament to be postponed for two weeks beginning July 29, following the detection of COVID-19 cases and concerns about the risk of infection.

Health director-general Tan Sri Dr Noor Hisham Abdullah said a total of 104 people were screened July 26 to 28 in Parliament through the RTK antigen (Ag) saliva self-screening test, and at 12.30 pm on July 29, MOH was informed of two positive COVID-19 cases who had been present at the Parliament building.

Following the detection of the two positive cases, the MOH had taken immediate action by conducting similar tests on 1,183 individuals in Parliament and found nine more COVID-19 positive cases and 48 close contacts.

In another development, Azmi said police had received 19 reports on the #Lawan rally held in the city last Saturday and that 11 participants and organisers of the rally had given their statements to the police.

He said the police were also in the midst of identifying and tracking down 47 other individuals believed to be involved in the rally based on the videos and pictures obtained.

An investigation paper has been opened regarding the rally, also involving Section 9 of the Peaceful Assembly Act 2012, Section 269 of the Penal Code and the Prevention and Control of Infectious Diseases Act 1988 (Act 342), he added.

Batu Sapi by-election to be held on Dec 5