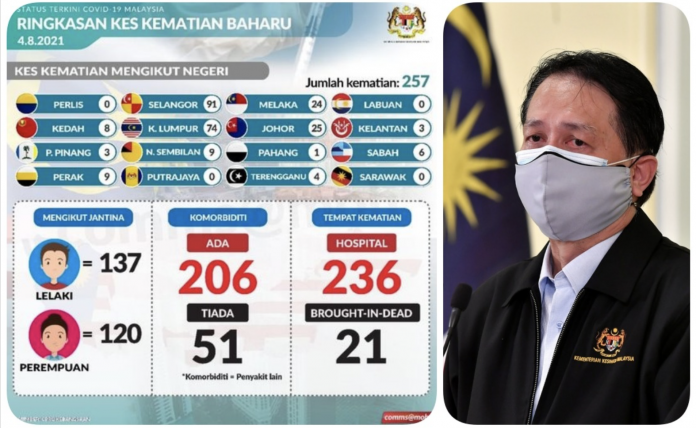 KUALA LUMPUR, Aug 4  — Malaysia on Wednesday recorded its highest daily COVID-19 death toll since the pandemic hit the country, with 257 fatalities reported in the last 24 hours.

Health director-general Tan Sri Dr Noor Hisham Abdullah said in a statement that this took the death toll in the country to 9,855 or 0.83 per cent of the total number of cases.

He said the fatalities involved 226 Malaysians and 31 foreigners, with 236 of them succumbing to the disease in hospital while another 21 were brought-in-dead (BID) cases, thus exceeding the previous record-high death toll of 219 on Aug 2.

A total of 91 fatalities were reported in Selangor; 74 in Kuala Lumpur; 25 in Johor; 24 in Melaka; nine each in Negeri Sembilan and Perak; eight in Kedah; six in Sabah; four in Terengganu; three each in Penang and Kelantan; and one in Pahang.

Covid-19 vaccine will be less than RM100 per dose, says Khairy