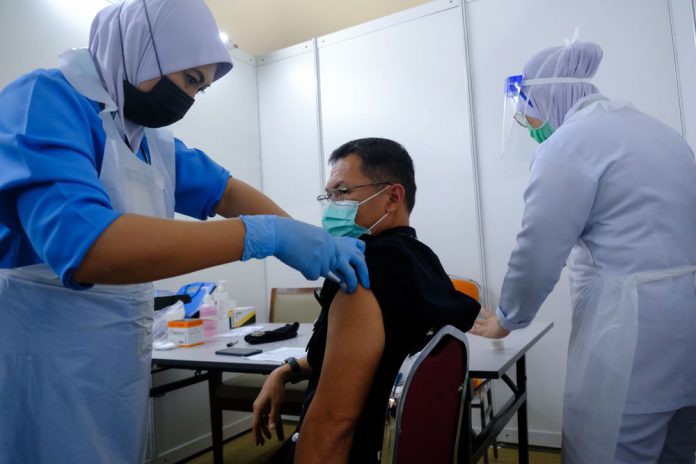 PUTRAJAYA, Aug 18  — The Special Committee on COVID-19 Vaccine Supply (JKJAV), jointly managed by the Health Ministry (MOH) and the Science, Technology and Innovation Ministry (MOSTI), will continue to implement all national pandemic control efforts and vaccination as planned.

Over 28 million doses of vaccine jabs had been administered in Malaysia, so far, according to the statement.

As of Aug 16, 47.2 per cent of the adult population in Malaysia had completed their vaccinations while over 73 per cent have received at least the first dose.

Until Aug 16, over 40 per cent of the adult populations of Sarawak, Negeri Sembilan, Perlis, Melaka, the Federal Territory of Labuan and the Klang Valley have completed both vaccination shots, meeting the threshold set under the National Recovery Plan (PPN).

The joint statement also mentioned that strategic measures that had been planned to optimise public healthcare and medical treatment throughout the country would continue to be implemented.

The Greater Klang Valley Special Task Force (GKV STF) will continue to focus on logistics efforts, COVID-19 assessment centres (CACs) and self-monitoring at home, in addition to ensuring the social support system for frontliners in the Klang Valley continue to function properly.

Stressing that vaccinations were effective in preventing COVID-19 infections, the joint statement said that of the 19,740 new cases reported on Aug 16, only 1.5 per cent were in categories three to five (requiring treatment for pneumonia, oxygen and ventilator support), while the majority of cases, 85.13 per cent, were in categories one and two (asymptomatic and mild symptoms).

It also stated that the drop in the number of daily COVID-19 cases in Sarawak and Labuan was due to the high immunisation rate.

It added that since the implementation of the capacity surge operation in the Klang Valley, admissions to hospitals and the use of beds in intensive care units (ICU) had dropped, including at the Tengku Ampuan Rahimah Hospital in Klang, where the number of daily admissions had dropped by 50 per cent since last week.

The joint statement also stated that the MOH would continue to implement integrated COVID-19 management in other regions in the country to optimise resources according to the clustering concept being done in the Klang Valley.