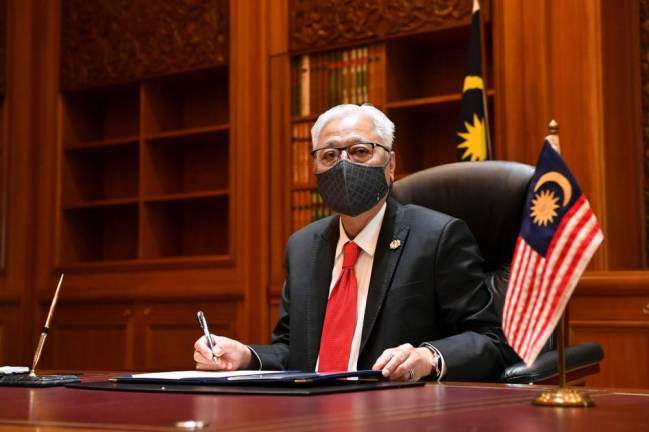 Ismail Sabri, who was in black suit, then clocked-in at his office on Level 5 of the Perdana Putra building, and this was followed by the reading of the doa led by the Prime Minister’s Department Integrity officer Muhd Redza Ahmad before he signed the Welcome Book.

His appointment was consented by the Yang di-Pertuan Agong Al-Sultan Abdullah Ri’ayatuddin Al-Mustafa Billah Shah in accordance with Article 40(2)(a) and Article 43(2)(a) of the Federal Constitution.

Today, Ismail Sabri is scheduled to make his first official working visit to the Kuala Muda and Yan districts in Kedah to check on the latest situation in areas affected by floods following a water surge incident in Gunung Jerai last Wednesday.

The floods have claimed five victims so far while another is still missing.

About 800 houses in Yan and another 200 in Kuala Muda were also affected by the disaster.

In his maiden speech as Prime Minister yesterday, Ismail Sabri introduced the concept of the Malaysian Family by urging the people of various religions, races and ethnicities to help the nation recover from the current economic and health situation.