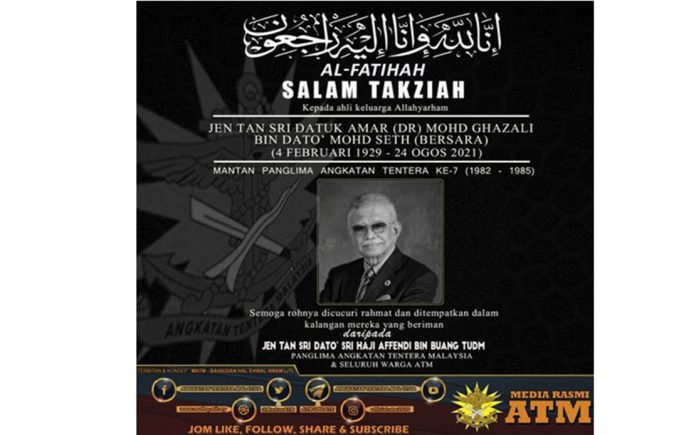 The Public Affairs Division of the Malaysian Armed Forces Headquarters said in a statement today that Mohd Ghazali, the seventh armed forces chief, was laid to rest at the Bukit Kiara Islamic cemetery this afternoon.

“Funeral rites were conducted at the Defence Ministry’s Khalid Al Walid Mosque, in full compliance with the standard operating procedure (SOP) of the National Recovery Plan (PPN) at around 2.30 pm today.

“After prayers were completed, he was buried at the Bukit Kiara Islamic Cemetery in the presence of his closest family members,” the statement read.

The statement also said that the Chief of Defence Force Gen Tan Sri Affendi Buang and the entire armed forces personnel expressed their sadness and condolences to Mohd Ghazali’s family along with their prayers that he would be placed among the righteous.

90% of Selangor’s elderly not signed up for vaccination, says Dzulkefly