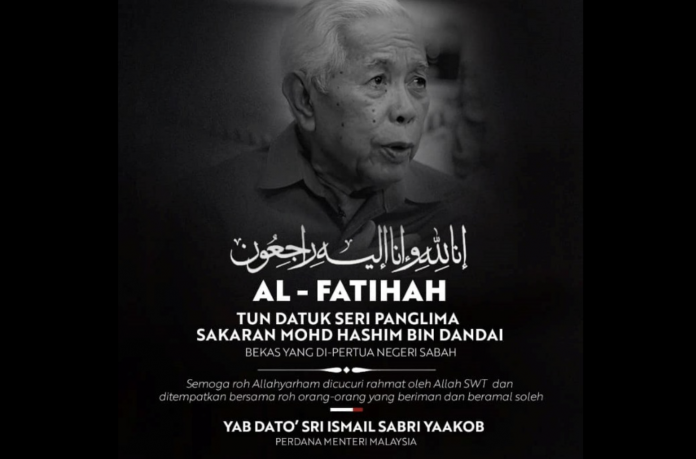 In expressing his condolences to Sakaran’s family and the people of Sabah, he said, Sakaran, who was the eighth Yang Dipertua Negeri of Sabah contributed a lot to the country’s development, especially in uplifting the socio-economy of the people of Sabah.

“I was very sad upon hearing the news about the death of the former Yang Dipertua Negeri of Sabah, Tun Sakaran Dandai,  at 6 am today.

“I  pray that Allah SWT blesses his soul and places him among the righteous,” said the prime minister in a post on his Facebook.

Sakaran, 91, who is also the eighth Sabah Chief Minister, was admitted to Gleaneagles Hospital, Kota Kinabalu, Sabah, on Aug 18 on suspicion of being infected with COVID-19. He died at the hospital at about 5.30 am today.

The recipient of the national-level 2017 Tokoh Maal Hijrah award, Sakaran played an important role in uplifting the socio-economy and education of the people of Sabah.

183 detained at entertainment centre in Bukit Bintang for violating RMCO