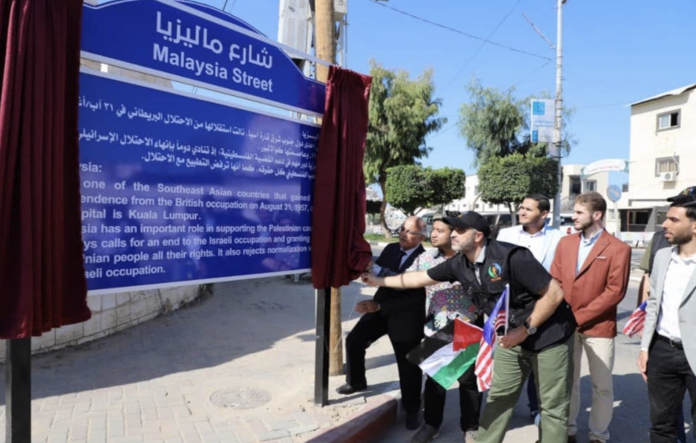 KUALA LUMPUR, Aug 31 — Gaza Municipality has named a road in the western district of Gaza city as “Malaysia Street” in commemoration of Malaysia’s National Day on Tuesday.

Sharing the announcement in his posting on Twitter, Palestinian Cultural Organisation Malaysia (PCOM) Chairman, Muslim Imran, stated that the road sign is located at Ansar roundabout, to the west of Gaza City.

He also posted a picture of the road sign installation which was written in Arabic and English.

The sign stated that Malaysia is a Southeast Asian country that gained its independence from Britain on Aug 31, 1957, and its capital is Kuala Lumpur.

Meanwhile, when contacted by Bernama, Muslim said this is the first time a major place or venue in Palestine is named after Malaysia.

“This is an act of appreciation for Malaysia’s solidarity with Palestine. Palestinians, in Gaza in particular, have seen Malaysia’s contributions and commitment to uphold their struggle over the years,” he said.

Muslim pointed out that this act of gratitude and appreciation will certainly have positive impact on the bilateral relations between Malaysia and Palestine.

He said both nations have been friends for decades and continue to build bilateral friendships over the years.

“Malaysia’s decision to name one road in Kuala Lumpur as ‘Jalan Palestin’ and Palestine’s decision to name a road in Gaza as ‘Malaysia Street’, of course is a good step forward in cementing this friendship. Hopefully someday Malaysians will be able to visit a free and liberated Palestine,” he added.

Civil servants in Terengganu to get special Aidilfitri aid of RM500