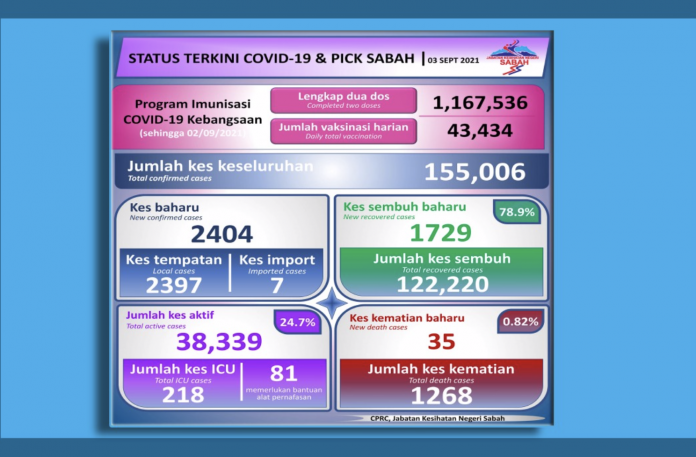 KOTA KINABALU, Sept 3  — Twenty-seven babies under the age of one were among the 2,404 new COVID-19 positive cases detected in Sabah today, bringing the cumulative number to 155,006 cases, said the State Local Government and Housing Minister Datuk Masidi Manjun.

The minister, who is also the Sabah COVID-19 spokesman, said of the total, 183 were children aged one to five while 455 were aged between six and 17.

He said close contact screening was still the main contributor to the total number of cases today at 57.9 per cent or 1,393 cases, followed by symptomatic screening (755 cases), cluster screening (65 cases), targeted screening (11 cases) and the rest from other screenings.

Meanwhile, Masidi said, a total of 1,729 COVID-19 patients recovered and were discharged from hospital today, making a cumulative total of 122,428 recovered patients, while 4,758 patients were still receiving treatment.

He said a total of 35 deaths were reported today in 11 districts, namely Tawau (17 cases), Sandakan (five cases), Kota Kinabalu (three cases), two cases each in Kalabakan and Beaufort while there was one case each in Kinabatangan, Semporna, Kota Marudu, Keningau, Penampang and Papar.

Things we need to know about ‘Flurona’ — Double infection of...