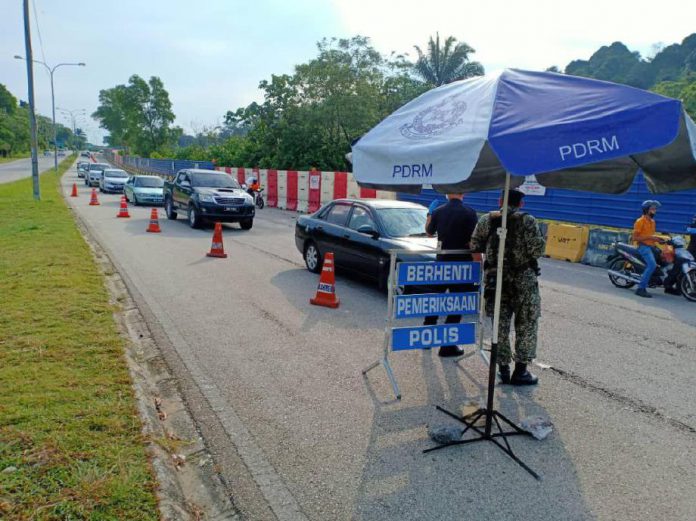 KUALA LUMPUR, Sept 10– The elements of the weather such as the heat and strong winds are among the challenges faced by security personnel at roadblocks under the movement control order during the COVID-19 pandemic.

Although it was challenging and they were faced with the dangers of the COVID-19 infection, it has not stood in the way of the security personnel from continuing to serve.

With the National Recovery Plan (PPN) moving into Phase Two today for the Klang Valley involving Selangor, Kuala Lumpur and Putrajaya, inter-district travel is allowed, and thus all roadblocks will be removed except at state borders.

He said the most memorable one was when a sudden storm occurred last month in which various equipment at the roadblock was damaged due to strong winds. It was a sunny afternoon, he said, with no signs of either rain or strong winds.

“But suddenly, there was strong winds, and the (police) cones, lights and equipment placed under our tent were blown away by the winds,” he told Bernama.

For another officer at a roadblock in Petaling Jaya, Insp Che Azizi Che Ahmad, 40, the experience of working at roadblocks has been very different from his actual job at the Commercial Crime Investigation Department.

He said working at a roadblock required a lot of patience, especially because people wanted to cross districts without valid reasons.

“Among the reasons given by people living in Kuala Lumpur to cross into Petaling Jaya included going to their second wife’s house or sending food to their fiancé’s house. Some even gave the excuse of wanting to go to the market in Jalan Othman (in Petaling Jaya).

“We encountered road users who became angry because they had been stuck for a long time in a jam due to congestion at the roadblock, however, after we explain and discuss the matter with them, they understand why we have to put up a roadblock,” he said.

Che Azizi said working at roadblock also exposed him and other members to the risk of the COVID-19 infection. Therefore, he took precautionary measures by wearing a face mask and gloves, and also showered before returning to his house in Bangi.

“Sometimes, I take a shower at the office or stop at the rest area along the highway before going home because I don’t want to endanger my wife and children,” he added.

For Mohd Hidayat Aziz, 35, a member with the rank of sergeant in the Narcotics Criminal Investigation Department of the Hulu Selangor police headquarters, he is prepared at any time to be assigned to roadblock duty, if needed.

“Police personnel are trained to always be ready to perform any task if needed to ensure the safety of the community.

“It does not make a difference whether we work in the office or in the field. If we have to be deployed at roadblocks again, I have no problem getting to duty. However, I hope roadblocks do not need to be mounted and that the COVID-19 situation can be fully controlled,” said Mohd Hidayat, who has been stationed at roadblock in Gohtong, Lembah Beringin and also near the Perak border in Tanjung Malim since last year.

Not impossible for COVID death toll to hit 26,000 by September...